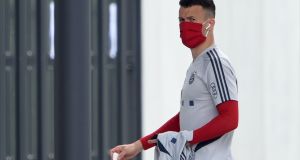 Thank God for the Germans, who will fill the huge football-shaped hole in many of our lives when the Bundesliga resumes this weekend. With apologies to Sweden, South Korea, and other countries that got there first, the return of one of Europe’s big leagues should attract vast global viewing figures for games including Schalke v Borussia Dortmund.

By this time next week, we may all be experts on a league usually overshadowed here by the ones in England, Spain, and Italy.

Already, I have learned a basic fact that had somehow escaped me until now – that “Borussia”, a popular prefix for club names there, is just Latin for “Prussia”. Hence its concentration in northern parts of modern Germany.

The most famous example, Borussia Mönchengladbach – everybody’s favourite German football club name – may have confused this issue, historically, by sounding like it was based in Munich, which it isn’t. Or perhaps that was just me.

Speaking of Latin, there is something about the circumstances of the Bundesliga’s return that evokes the thought of ancient wars. It’s partly the figure 300 – the number of essential staff deemed necessary for each game, and therefore the maximum allowed in stadiums. This reminds me of the 300 Spartans who made a famous last stand for Greece at the Battle of Thermopylae. But also, more generally, the idea of footballers risking their health to entertain the public makes them seem even more than usually like gladiators.

On the other hand, I gather that match preparations for the quarantined players include everything from advance issue of salt and pepper sachets before meals to safe protocols for goal celebration.

Germans are always famously well prepared for penalties.  But let’s not forget they also gave us one of the best choreographed goal celebrations ever, when Jurgen Klinsmann led Tottenham Hotspur team-mates in a mass impression of his reputation for diving in 1994.

That was socially distanced too – none of the usual hugging or huddles, just separate, synchronised dives. It might even be a model for the Covid-19 era, although any kind of a falling down routine would now be in bad taste. Anyway, if there is a country in Europe that can resume football safely, it’s Germany.

So maybe comparison with gladiators is uncalled for. The message to supporters is more like: “We who are about to run to a slightly greater, but calculated, risk of catching something salute you.”

I look forward to the guilty pleasure of watching, anyway. I might even eat popcorn from the comfort of my couch while savouring the return of something much missed. If there’s a German word for that, it must be Mönchengladbach.

The expressiveness of the German language was brought home to me the morning after a famous day in Stuttgart 32 years ago when one of the local newspapers had the headline: “Irland schlug England”. The middle word meant only “beat”, from the verb schlagen (“only schlagen”), but it sounded much more dramatic than the English.

The sch- section of German dictionaries has many equally entertaining words, including one without which the GAA would be bereft. I refer of course to “schemozzle”.

Strictly speaking, that’s Yiddish, a mixture of German and Hebrew, but thanks to the late Micheal O’Hehir, a GAA game is still never complete without one.

There will be no schemozzles this summer, alas. Yet in one respect at least, whenever Gaelic games resume, they will have a head-start on adjusting to the new normal. Unlike in soccer, there will be little need to practise safe goal celebrations.

I was reminded of this recently when RTÉ replayed the game with the most famous goal in Gaelic football history. And in fact, as I had somehow forgotten, Seamus Darby was on that occasion subjected to a prolonged man-hug from one of his team-mates.

This was perfectly understandable in the circumstances and yet, by GAA standards then, as ground-breaking as the sex scenes from Normal People.

The rest of the celebration was non-contact, however, which was much more the norm and, despite the influence of other televised team sports, has remained so ever since.

Only last September, for example, Dublin – who in the 1970s and 1980s were usually blamed when anything that smacked of English soccer crept into GAA – did what Darby prevented Kerry doing in 1982.

Again there was only one goal in the game. And having sprinted half the field to score it, Eoin Murchan then sprinted back with, if anything, increased urgency. He looked like a fireman who’d left the station to buy coffee and then heard the siren go off.

There was no time for hugs, huddles, or claps on the back. None of his team-mates got within two metres.