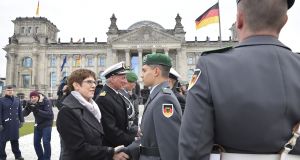 Germany’s new federal defence minister and successor to Angela Merkle as CDU leader, Annegret Kramp-Karrenbauer, dropped a bombshell when she said said: “Germany, like any other nation in the world, has its own strategic interests . . . we act according to our interests every day,” she said. “We must finally start to admit that.” Photograph: Getty Images

By German standards, Berlin’s response to Emmanuel Macron’s “brain death” diagnosis was lightning fast. Just 12 days after the French president’s swipe at Nato, Germany has presented a proposal for a root-and-branch review of the alliance to be completed by 2021.

On Wednesday, in a riposte to Macron’s assessment, German foreign minister Heiko Maas prescribed an injection of “fresh political [brain] cells” to ensure Nato – Europe’s “life insurance for 70 years” – regained its vigour for the coming decades.

“We have to adapt our alliance to current challenges and take on greater European responsibility in security policy,” said Maas in Brussels.

He has called for a commission of experts to make reform proposals, in particular to broaden Nato’s focus beyond pure defence to related political concerns.

While Nato general secretary Jens Stoltenberg made positive noises on the proposal, Berlin wags responded with a beloved German truism: “if you don’t know what to do, set up a working group”.

They point out that, drilling down beyond the sandy soil of Berlin’s defence and security debate, and you soon encounter an impenetrable bedrock of realpolitik.

He warned his fellow Germans not to use – even abuse – their fascist past as an alibi for hand-sitting in the present. That, he said, confused military restraint with a moral high horse.

The intervening years have seen regular regurgitation of this speech, with varying levels of ambition.

Germany’s safe existence in the middle of a peaceful, prosperous Europe 'cannot be had for free'

In March 2017 Chancellor Angela Merkel delivered a sober postmortem after her first, bruising, Nato summit with US president Donald Trump.

“The times in which we could completely depend on others are, to a certain extent, over,” she said. “We Europeans truly have to take our fate into our own hands.”

Last March she surprised many with a proposal for a European aircraft carrier, “to give shape to the role of the European Union as a global force for security and peace”.

It was a novel idea for the head of the German armed forces where, for years, troop morale has been as low as the combat readiness of banjaxed Bundeswehr aircraft, submarines and tanks.

Wolfgang Ischinger, a former German ambassador and defence doyen, suggested talk of aircraft carriers presupposed “a common strategy and decision-making process [and] Germany is light years away from that”.

With the exception of the Left Party, all mainstream political parties here agree that Germany needs to do more heavy lifting on security and defence.

Press for detail, however, and that consensus soon splinters in a dozen directions. More involvement in Ukraine? More capacity-building in Africa? Or, as hawkish CDU figures want, a military capacity commensurate with Germany’s Nato obligations?

Government officials insist that, after regular attacks from Washington, recent military spending boosts have put Germany on course to meet its Nato commitments. Critics who point out Berlin’s target date – 2031 – will soon find themselves engulfed in the muddy waters of another debate: should other spending, such as development aid, not be factored into Nato commitments?

Ask senior defence figures where, in security and defence terms, they want their country to be in five years and you can expect a blank stare.

Across the political spectrum, expect the same, murmured response: public opinion is very difficult. Ask about their plan to shift public opinion to where they believe it needs to be, and the blank stares take on a bovine quality. Frustrated Berlin think tank analysts call this modern Germany’s “big Switzerland” phenomenon.

Still, if the purpose of Macron Nato remarks was, ahead of next month’s London gathering, to wipe mildew off the security debate – he has succeeded in Germany.

Two weeks ago Kramp-Karrenbauer gave a little-noticed speech echoing many of Macron’s defence concerns: the rise of China, rising US reticence and the corresponding need to strengthen European defence co-operation to complement, rather than compete with, Nato.

She argued that Germany’s safe existence in the middle of a peaceful, prosperous Europe “cannot be had for free”.

Speaking at a military academy in Munich, Kramp-Karrenbauer said Germany’s size, location and economic heft meant it was no longer enough to “wait and see if others act”.

Then she dropped, by modern German standards at least, a bombshell that saw even Berlin’s most jaded defence analysts sit up and take notice.

“Germany, like any other nation in the world, has its own strategic interests . . . we act according to our interests every day,” she said. “We must finally start to admit that.”

Now for the practical part.

1 Coronavirus: People to be allowed to travel anywhere in their county from Monday as Ireland moves to exit lockdown
2 California police fatally shoot 22-year-old man on knees with hands up
3 ‘Get the eff out of this country’: Irish racism, as heard on Liveline
4 Covid-19: Wage subsidy and unemployment payment extended to end of summer
5 Donald Trump is in trouble, and that could spell very bad news
Real news has value SUBSCRIBE