Germany has a vision for the future of Europe

Europe must fight to preserve the international order, and become the heart of an alliance for multilateralism 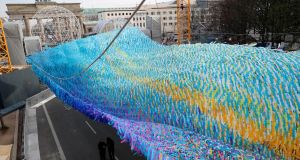 The art installation Visions in Motion at Brandenburg Gate in Berlin, Germany, on November 1st, 2019. It is made of 30,000 ribbons with written wishes and messages. On November 9th, Germany will mark the 30th anniversary of the fall of the Berlin Wall in 1989. Photograph: Reuters/Fabrizio Bensch

Where were you when the Berlin Wall came down? All of us in Europe who experienced November 9th, 1989, can answer this question. When East and West Germans embraced each other with tears of joy 30 years ago, this spelled not only the end of the division of Germany; when the wall came down, the Iron Curtain, which had divided our continent for 40 years, was also torn.

We Germans, therefore, not only celebrate the fall of the wall on November 9th, we celebrate the courage with which people throughout central and eastern Europe fought for freedom and democracy. We celebrate a Europe that – but for a few exceptions – is united to its good fortune.

We Germans know whom we have to thank for this good fortune, namely the hundreds of thousands of East Germans who took to the streets to protest for freedom.

We also owe this to the Gdansk shipyard workers, the singing revolutionaries in the Baltic countries, the Hungarians who were the first to cut through the Iron Curtain, the pioneers of the Charter 77 in Prague, those who took part in the Candle Demonstrations in Bratislava, the revolutionaries of Timisoara – all the women and men whose desire for freedom swept away walls and barbed wire.

And we have our friends and alliance partners in the West, as well as Gorbachev’s policy of glasnost and perestroika, to thank for this, paving the way to reunification.

German unity was also a gift from Europe to Germany – at the end of a century in which Germans had brought unimaginable suffering to this continent.

This gives rise to an obligation for us, namely to complete the project that is the unification of Europe – building a Europe that lives up to the values and dreams of those who took to the streets in 1989 to fight for freedom and democracy. We want to work towards this, also when we assume the EU presidency next year, 30 years after reunification.

Saving the euro and the endless dispute about taking in and distributing refugees have opened up new rifts in Europe. With Brexit we are seeing a country leave the EU for the first time – Ireland is particularly affected by this both politically and economically.

What is more, in many countries of Europe people are flocking to those who would have us believe that less Europe is better for us.

However, it is clear that we will only be able to hold our own in the world if we Europeans stand united. After all, none of us can cope with the four major worldwide challenges – globalisation, climate change, the digital transformation and migration – by ourselves.

Together we must do more to defuse the conflicts in the Donbass, Syria and Libya. We must strengthen Europe’s instruments for peaceful conflict resolution

Exhortations from Dublin or from Berlin and Paris alone fall on deaf ears in Moscow, Beijing and, unfortunately, to an increasing extent also in Washington, DC.

It is only Europe’s voice that carries decisive weight. This is why unilateral action at national level must finally be taboo in Europe.

We must work together to formulate and implement a European policy vis-à-vis countries such as Russia and China. For this we need more effective European diplomacy, and, above all, flexibility from all of us. If we pursue 27 different national approaches we will fail.

Together we must do more to defuse the conflicts in our neighbourhood – in the Donbass, in Syria and in Libya. We must strengthen Europe’s instruments for peaceful conflict resolution in order to do this.

Moreover, we need a genuine European defence union alongside Nato that is able to act independently where necessary.

Together we must fight to preserve the international order and become the heart of an alliance for multilateralism. After all, peace, also in Europe, depends on preserving this order.

We must assume a leading role in efforts to protect the climate. We need courageous political decisions and genuine efforts in society to make our continent climate-neutral by the middle of this century. If we do not manage to do this then we will put our children’s future in jeopardy.

Together we must strengthen Europe’s economy in order to avoid being crushed in the trade dispute and in the technological competition between China and the US. The next EU budget must, therefore, be a budget of the future that invests in research, high-tech and the digital transformation. This is the only way to safeguard Europe’s prosperity.

The autumn of 1989 showed what we Europeans are capable of when we think and act beyond national borders; the power that we have when we stand up for freedom and democracy and for the rule of law and justice. The power to overcome walls and borders. The power to assert our values and interests in an increasingly authoritarian world.

This world needs Europe’s courage to embrace freedom, the courage of 1989. Let us dare at long last to be Europeans, to act as Europeans, without any ifs or buts!

Heiko Maas is the foreign minster of Germany

1 Love in a time of Covid: John and Mary marry over 40 years after first meeting
2 Two hundred Irish retailers for all your online Christmas shopping
3 Father unaware partner and baby dead until gardaí called to raise alarm
4 Anatomy of a lockdown U-turn: Holding out against Nphet a gamble politicians unwilling to take
5 Sacha Baron Cohen: ‘I had to ring the alarm bell and say democracy is in peril’
Real news has value SUBSCRIBE