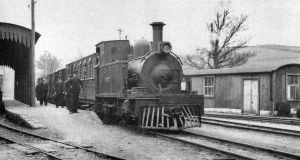 It was the ultimate trick question, one that sealed the fate of one of the most cherished railway systems in the country, that in west Cork.

A delegation had travelled from the area to Dublin to meet Todd Andrews, then chairman of CIÉ, to beg him not to close the system. He asked to see their train tickets; no-one on the delegation had any. The schedules of the trains from west Cork into Cork city and from Cork to Dublin were such that the delegation could not have made the journey by train.

Instead, they drove to Dublin and the collective reply to Andrews’s question meant that the meeting was over before it began. CIÉ proceeded to close the west Cork railway on April 1st, 1961, and by the following year, had lifted the tracks. The railway land was sold to local landowners, and the wooden sleepers, 500 for every mile of track, were sold off for a shilling each. Many ended up being shipped to Nigeria for the railways there.

West Cork’s railway system began in 1849, when the first section, from Ballinhassig to Bandon, was opened. Next came the section from Kinsale Junction to Kinsale, in 1863, while by 1877, it had reached Skibbereen. The final section, a narrow-gauge line from Skibbereen to Schull, opened in 1886. By then, all the main towns in west Cork were linked by rail.

For many years, the railway system provided a transport link for the people of west Cork at a time when there were few cars and buses. It was an even more important freight link. At its height, the system had around 70 passenger carriages, but 450 freight wagons. But by the 1950s, more people were getting cars. The train took a leisurely two hours to cover the nearly 60 miles from Albert Quay station in Cork to Bantry. Then lorries could deliver such items as coal much more efficiently.

The train service was always popular for seaside excursions from Cork city, to such places as Courtmacsherry and Inchydoney, near Clonakilty. The annual Baltimore regatta on August bank holiday Mondays was a popular rail excursion, even into the late 1950s.

But the first closure came in 1931, when the branch line to Kinsale was shut down. After the war, coal shortages were a big problem. The Skibbereen to Schull line shut in 1947; the branch line to Courtmasherry was also closed in 1947, although excursion trains did run on this section throughout the 1950s.

Despite all its shortcomings, the west Cork railway engendered fierce loyalty. Around the time of its closure, other regional systems were being, or had already been, terminated, including the railways in Co Donegal, the Cavan and Leitrim railway and the West Clare railway, but none engendered the opposition that CIÉ faced in west Cork.

When the last train left the station in Cork, it had to have a Garda escort.

Another line out of Cork also got the axe, the link from Cork to Youghal. For many years, this train was hugely popular with Cork people going to the seaside beaches in Youghal, as Hassard Stacpoole, an authority on Irish railway history, points out. This line remained open in the 1970s and 1980s for excursions and goods traffic; one of the last trains from Youghal was in 1987, a pilgrimage special via Cork to Knock. The station in Youghal is still in place, although disused for years.

The old line to Kinsale, as a greenway, would include the Chetwynd and Halfway viaducts, as well as the Gogginshill tunnel, the longest disused tunnel in Ireland, around 800 metres long.