Fr Georges Lemaître: An Irishman’s Diary about the father of the big bang 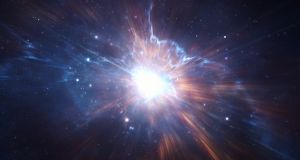 Big bang: even the least scientifically minded of us have probably heard of the theory, but not many may be aware that it was a Belgian Catholic priest who first put forward the idea

Even the least scientifically minded of us have probably heard of the “big bang” theory, but not many may be aware that it was a Belgian Catholic priest who first put forward the idea. He was Georges Lemaître, and he died 50 years ago on June 20th.

One commentator has observed that Lemaître “showed that religion and science – or at least physics – did not have to be incompatible”. But in a most informative article in the Tablet (March 22nd, 2008), John Farrell, author of The Day without Yesterday: Lemaître, Einstein and the Birth of Modern Cosmology, pointed out that the reason some scientists rejected Lemaître’s theory when he put it forward was that he was looking for a religious explanation for the beginning of the universe. Farrell himself was convinced that this was not the case because Lemaître was much too good a scientist to let his religious beliefs influence his scientific research and reasoning.

Lemaître came from Charleroi, and after attending the Jesuit College of the Sacred Heart there he studied civil engineering at the Catholic University of Leuven. The first World War interrupted his studies, and he became an artillery officer in the Belgian army, receiving the Croix de Guerre for his services. During the war he read Henri Poincaré’s Électricité et Optique, which caused him to change career direction and study physics and maths on returning to university.

In 1927 Lemaître put forward his groundbreaking idea of an expanding universe, in the process deriving what we call Hubble’s law two years before Hubble himself did

As well as studying science, he studied for the priesthood. It was through his teachers at the seminary that he became acquainted with Einstein’s work. He was awarded a doctorate in Leuven in 1920 and was ordained in 1923. That same year he won a scholarship to Cambridge University, where he studied under the astrophysicist Sir Arthur Eddington, who introduced him to the latest research in cosmology and astronomy.

He moved on to work with the American astronomer Harlow Shapley at Harvard University and completed a second doctorate at Massachusetts Institute of Technology. He also worked with Vesto Slipher and Edwin Hubble, two other American astronomers, assembling proofs and data, and in 1927 he put forward his groundbreaking idea of an expanding universe (in the process deriving what we call Hubble’s law two years before Hubble himself did).

His theory was ignored at first, perhaps because it was published in a scientific periodical little read outside Belgium. Eddington did not comment on it, and even Einstein was reluctant to support this extension of his theory of general relativity. But when Hubble published his findings, in 1929, that galaxies were moving away from us at high speeds proportional to their distances from us, Einstein and Eddington were forced into a rethink.

Lemaître’s 1927 idea was not related specifically to the big bang, but his subsequent research caused him to conclude that Einstein’s static model could not exist indefinitely into the past. The cosmos had to have a beginning, and Lemaître came up with his idea of “the primitive atom” that, in John Farrell’s words, “disintegrated at the beginning of time and initiated the expansion of the universe”.

It was later scientists, such as George Gamow, who provided further support for and development of what we now know as the big-bang theory. (The term, incidentally, was coined as a pejorative one by a strong opponent, the Cambridge astronomer Fred Hoyle.)

Lemaître had to struggle against the arguments of colleagues that his reasons for putting forward the theory were religious. In 1951 Pope Pius XII expressed his enthusiastic view that the big bang represented the moment of God’s creation. This caused Lemaître embarrassment, and he privately remonstrated with the pope; because of the damage he felt had been done he published no further research on the revolutionary theory to which he had given birth.

Pius’s successor, John XXIII, asked Lemaître to serve on a commission to study the question of birth control. The clearly bemused Lemaître told the head of the commission that he did not think it was a good idea for a scientist to pretend to any expertise outside his own speciality.

Subsequent scientific discoveries have convinced most astronomers that his theory of the origin of the universe was correct. To what extent, if any, did his religious beliefs influence his reasoning? Farrell quoted the science historian Jean Eisenstaedt: “As a priest he probably felt a closeness to God that may have given him a feeling of freedom in front of creation . . . Lemaître aimed at combining the global and the local: is there a question more suitable for a priest?”