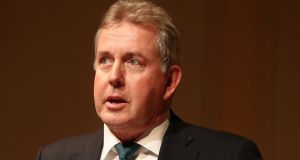 The UK’s ambassador to the US, Kim Darroch. Photograph: Niall Carson/PA Wire

Britain’s ambassador to the United States, Kim Darroch, is in the spotlight following the leak of his confidential reports on the Trump White House.

Criticism is being directed at him for performing a public servant’s most essential role. He gave honest advice. Speaking truth to power does not go down well with Brexit party leader Nigel Farage and his fanatics for the simple reason that truth is their most dangerous enemy.

Darroch was my British opposite number when I was Ireland’s ambassador to the European Union some years ago. Like many of his colleagues, he was superbly effective at promoting British interests. His sensitivity to the concerns of other member states, including Ireland, contributed to his impact.

Objective evidence must be at the heart of all decisions

Unlike the Ann Widdecombes of this world, he understood that successful negotiation in pursuit of one’s country’s interests is about respect, not rants, about detail, not diatribes. The only people apparently unaware of the profound UK influence on the EU over four decades can be found in the UK itself.

Darroch, in providing London with his confidential analysis, was simply doing his job. The suggestion that his reports were undiplomatic demonstrates a lack of understanding of diplomacy. An ambassador is supposed to be diplomatic when dealing with his or her host government.

But ambassadors are worth their salt only if they are prepared, when appropriate, to be undiplomatic in their confidential reports to their own government. Most reports will be of a more specific factual nature. However, from time to time, an effective ambassador should offer his capital insights into some deeper realities.

There is nothing remotely startling about Darroch doing his job. There are, however, five disturbing aspects of this affair.

First and foremost, there is the leaking of highly sensitive confidential reports by what appears, at this stage, to be an internal British source. The leak will not just embarrass a decent civil servant. It is likely also to have a serious effect on the UK’s relationship with the US government.

Above all, however, the leak undermines the capacity into the future of the British diplomatic service to do its job in pursuit of British interests. The chair of the House of Commons foreign affairs committee, Tom Tugendhat, has without exaggeration called the leak a form of treachery.

Second, the public criticism of Darroch is part of a pattern of cowardly attacks on civil servants who, as politicians and journalists well know, are not in a position to defend themselves. The British ambassador to the EU at the time of the Brexit referendum, Ivan Rogers, found it necessary to resign because his factual reporting of the views of other member states did not go down well in London.

Ollie Robbins, the civil servant who led the Brexit negotiations under close political direction, has been publicly pilloried for carrying out politicians’ instructions. His crime, apparently, was to be too influential. If in fact he was too influential, it could only be because his setting out of the arguments was too convincing or because the politicians he was advising were too pliable.

Third, it is essential for the well-being of any country that public servants are encouraged to present the truth in all its complexity, warts and all, rather than intimidated from doing so. The dismissal of objective advice is not just about giving civil servants a hard time.

Fourth, the possibility of Tory leader in waiting Boris Johnson appointing Farage as ambassador in Washington is, incredibly, being given some credence. That the idea is not laughed out of court is a measure of the Brexit madness. Here are just a few of the job specs for the post of British ambassador in Washington. Obey instructions from the London government.

Promote British interests, not those of another country. Accept and implement British policy, including on Russia and the EU. Be diplomatic in the exercise of your public role and honest in your private reporting. Nigel should be a shoo-in.

Finally, while Theresa May understandably felt she had to distance herself from the substance of Darroch’s reports, as she could hardly be seen to endorse it, the casual rejection of experts laid the foundations for Brexit and now drives it forward.

The dismal corollary of the sidelining of real expertise is that pseudo-experts now line up to fill the void, invited on to television panels on the basis that talking heads are as valuable as thinking brains.

Both candidates for the Tory leadership, although they have much objective advice available on Brexit, continue to prove that TS Eliot was right that “humankind cannot bear very much reality”.

Bobby McDonagh is a former Irish ambassador to the EU, Italy and the UK