Fintan O’Toole: When it comes to Irish debt, the State puts on the rich mouth 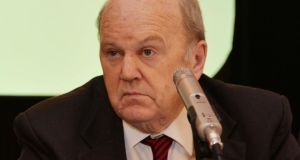 ‘The mindset that produced Michael Noonan’s “affordable and repayable” debt is one in which Ireland’s determination to be “very good” contrasts favourably with Greece’s propensity to be very bad’ Above, Michael Noonan, Minister for Finance. Photograph: Alan Betson / The Irish Times

There was the boy who cried wolf. And then there was the government that cried “Wolves? Sure, they’re dotes. Just look at them there snuggling up close to the sheep. Divil the harm they ever did anyone.”

Last week, Michael Noonan, in explaining why Ireland was not supporting Greek calls for a European debt resolution conference, said this about Ireland’s €214 billion debt: “Our debt is in a very good position now; it’s affordable and it’s repayable.”

There could hardly be a clearer message to our gallant allies in Europe. Keep your hands in your pockets. You’d only be insulting us if you offered us a dig-out.

This is demented, but it is a methodical kind of madness. Noonan’s “very good” debt is a product of a determination that Ireland be seen as a “very good” country. While half the population continues to live in a 19th-century social realist novel called Hard Times, the Government lives in an 18th-century epistolary novel called Virtue Rewarded, in which Cathleen ni Houlihan, a servant girl in the big house of Europe, resists all attempts to seduce or force her from the path of fiscal righteousness and is rewarded in the end by the love of her master.

We can actually measure in hard currency the comparative benefits of being very good and being very bad. It comes down to this question: how much does it cost you to service your debt? Who, in other words, gets the best deal from its international lenders, good Ireland or bad Greece? There’s no contest. Last year, Greece paid €8 billion to service debts of €315 billion. Last year too, Ireland paid €7.5 billion to service debts of €214 billion. So it cost us almost as much to service €100 billion less. Why? Well at least in part because, even before Syriza took office, the Greeks didn’t go around telling everyone that their debt is “affordable and repayable”.

What do those two words actually mean? By affordable, Noonan presumably means that the €7.5 billion it costs us every year to pay interest on the debts is not a problem. To put this extraordinary claim into perspective, €7.5 billion is over 40 per cent of all the money the State takes in every year from income tax. It’s just a little less than the cost of running the entire education system. Or to look at it from another perspective, when the bailout happened in 2010, Britain lent us €7.5 billion – hailed at the time as a hugely significant gesture. Now, we spend that much every year on interest alone. As Paul Muldoon puts it in a brilliantly mordant line in his new poetry collection: “Source is to leak as Ireland is to debt.”

And in any case, affordable by whom? If you’re a senior technocrat, I suppose it is affordable – the State can obviously still afford to pay your huge salary so where’s the problem? But if, like half the population, you depend on State spending and services to keep you out of poverty, the fact that the State has €7.5 billion less to spend is very bad news. That money would, for example, eliminate child poverty. Can the 400,000 children now living in deprivation “afford” to remain as they are?

According to our lenders, it’s going to happen in the 2020s. Written into the debt calculations is the certainly that, by 2020, Ireland will be running a “primary surplus” every year of 4.6 per cent of GDP. This is the money we would then have available to start paying down the debt. So here’s another question: has any advanced country ever run a primary surplus of this size over a sustained period? I know of one: Norway, which puts away a large lump of its vast oil revenues every year. The idea that Ireland in the lifetime of the next government is going to become fiscally Norwegian without the oil is ludicrous. And that’s without even considering private debt – if we did that we’d only depress ourselves by noting that, overall, Irish public and private debt is somewhere around €700 billion.

How bizarre that the State has chosen now to reverse centuries of Irish practice and is now putting on the rich mouth.

1 Coronavirus: Death rate from Covid-19 in Ireland rises to 2.4%
2 Netflix: 10 of the best new shows and films to watch in April
3 Coronavirus in Ireland: New powers of arrest for gardaí expected to come into force
4 ‘On the bike I meet no one’: 78-year-old cyclist refuses to cocoon
5 Coronavirus: Journal Media to cut pay by up to 20 per cent
Real news has value SUBSCRIBE