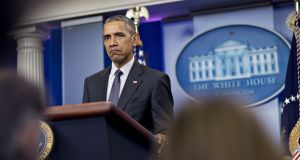 Corporate tax avoidance is now a huge political issue forcing the government to stand up to the corporations: President Obama’s effective blocking of the Pfizer/Allergan deal is a resonant moment. Photographer: Andrew Harrer/Bloomberg

The old Irish Transport and General Workers Union used to have the letters OBU on its badge. They stood for One Big Union. The Irish flag probably should have OBI: One Big Idea. The OBI is FDI.

For all of my lifetime, the State has been shaped around the imperative of attracting foreign direct investment. And, albeit with many serious qualifications, it has worked. The influx of investment, largely from US-based transnational corporations, transformed a relatively poor and stagnant rural society into a freer, more prosperous and more habitable place. It has worked so well that we find it unthinkable that OBI might be obsolescent.

It’s quite understandable that we in Ireland look at all the US companies in our midst entirely from our own point of view. We don’t think about how they look from Detroit or Milwaukee or Trenton. And for a long time we didn’t really need to.

When the OBI was born, US corporations were not coming to Ireland primarily to avoid tax – they were here for cheap, English-speaking labour close to European markets. And in any case, those corporations still paid a hell of a lot of tax in the US, so whatever they were saving through Ireland’s generous tax breaks was small potatoes.

Even when it became more and more obvious that tax avoidance was an alluring aspect of Ireland’s charms, we could rely on three things to protect us. First, who didn’t love Ireland? We were a little throwback country where everybody’s ancestors came from. Second, the vast majority of Americans knew as much about corporate tax avoidance as they knew about hurling, so it wasn’t a political issue. And third, corporate power was largely unchallenged – both Democrats and Republicans did what the giant corporations wanted, even if that was against the interests of their own voters.

But here is the news: those protective screens are getting very thin. We’re not in Glocca Morra any more – we’re the land of the corporate inversion. If you listen to talk radio in the US, Ireland equals Pfizer plus Allergan minus a vast amount of taxes that should be paid in the US. Corporate tax avoidance is now a huge political issue, feeding directly into the insurgency of Bernie Sanders and indirectly into that of Donald Trump. And this is forcing the government to stand up to the corporations: President Obama’s effective blocking of the Pfizer/Allergan deal is a resonant moment.

When Ireland got its OBI, corporations were paying about a third of all US federal taxes, so it didn’t matter if relatively tiny amounts were leaching away in little Ireland. But now the corporations are paying just 11 per cent of the federal budget and it matters a great deal because the difference is being made up by ordinary Americans who have to take up the fiscal slack and endure gross inequality, bad infrastructure and poor services.

The problem for the OBI is that all of this is no longer the dirty little secret of penthouses and boardrooms – it is feeding the rage of ordinary Americans at their entire establishment. And they’re not wrong. The inequality that is threatening to tear the US apart cannot be tackled without forcing the big corporations to pay much more tax in the US. Or, to put that another way, to route much less of their money through Ireland. The next US president will have to move against the great corporate tax dodge.

This is arguably the biggest economic challenge facing Ireland over the next decade. And of course it has featured nowhere in the discussions on the formation of a government. The shifts in the US need not be so terrible for us. They will unfold gradually over the next decade and we have time to plan for a more balanced economy. But only if we recognise that for ordinary Americans our OBI looks increasingly like FU.