Fintan O'Toole: There is no good Brexit option for Johnson this weekend - only lesser evils

Boris Johnson has said Britain “will have a solution that's much more like an Australian relationship with the EU, than Canadian.” Australia, unlike Canada, has no comprehensive trade deal with the EU, leaving its trade mostly subject to tariffs. 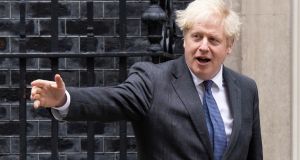 Boris Johnson: Britain is left facing an excruciating choice he can no longer avoid. It either destroys its trading relationship with its largest partner. Or it accepts being bound by rules it has no voice in making. Photograph: Dan Kitwood/Getty Images

Shortly before the Brexit referendum in 2016, Michael Gove made a joke about the Irish famine. As co-leader with Boris Johnson of the Leave campaign, he was giving a major set-piece speech, one of the very few that actually made some effort to describe what would happen if they won.

Gove was mocking the Remain side’s scare stories about the dark consequences of Brexit: “The City of London would become a ghost town, our manufacturing industries would be sanctioned more punitively than even communist North Korea, decades would pass before a single British Land Rover or Mr Kipling cake could ever again be sold in France and in the meantime our farmers would have been driven from the land by poverty worse than the Potato Famine”.

6 Air to the throne: Meghan and Harry set to lift lid on royal split in TV interview

9 Four men arrested over Dublin shooting of woman and man

11 Brexit: UK calls on EU to ‘shake off any remaining ill will’ amid fallout over North trade move

20 Laura Whitmore: ‘I’ve had enough of being trivialised and gossiped about’

24 Bank of Ireland closure brings out true grit in Abbeyfeale

25 Tin Cup: A box office hit that played its way into part of golfing fabric

29 How will Denis O’Brien’s departure change the Irish media landscape?

32 Growing the economy, not cutting debt, must be our priority

34 Ross O’Carroll-Kelly: ‘We’d be a lot better off if we’d remained port of Britain’

36 Murmuration of starlings: How our stunning front-page photograph was taken

38 Jennifer O’Connell: We did not need Pontins to teach us about anti-Traveller discrimination