Fintan O’Toole: Syriza’s way or Frankfurt’s way? There’s only one answer for Ireland 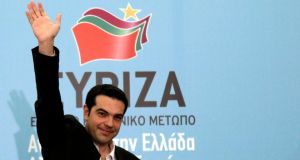 ‘We are a “northern European country” – Greece is “down there”, like the naughty bits we don’t like to talk about. But after Sunday, we may have to talk about them after all.’ Above, Alexis Tsipras, leader of the Syriza Party. Photographer: Kostas Tsironis/Bloomberg

The most important political party for Irish people right now is not Fine Gael or Fianna Fáil or Sinn Féin. It is Syriza, the Greek left-wing opposition movement that stands a good chance of winning the general election next weekend. Ever since the euro zone crisis took hold in 2008, the official Irish line has been that we do not recognise Socrates, Aristotle, Plato, Euripides, Nana Mouskouri, Zorba the Greek, Irene Papas, Demis Roussos, Nick the Greek, Euripides, Maria Callas, Prince Philip or feta cheese. For a long time we were officially “not Britain”. Now we are officially “not Greece”. We are a “northern European country” – Greece is “down there”, like the naughty bits we don’t like to talk about. But after Sunday, we may have to talk about them after all.

In the euro zone story, Ireland has projected itself, not just as not Greece but as the anti-Greece. Greece is trouble; Ireland is well-behaved. There is some logic to this position — the Greeks went into the crisis with a much worse underlying economy than the Irish did — but there’s also an unspoken element of ethnic stereotyping. Ireland (in a delicious historical irony) wishes to be thought of as coolly Anglo-Saxon, not hot-blooded Mediterranean.

This double game of international cute-hoorism is coming to an end. If Syriza wins the Greek elections and follows through with its demands for a European debt resolution conference, Ireland has to decide which side it is on. To adapt something someone once said here, is it to be Syriza’s way or Frankfurt’s way? Are we to go on with crushing burdens of debt and the failed policies of so-called austerity or will the EU face up its historic calling to prove itself to be a true economic community? There is only one place for Ireland to be at this moment of truth and it’s not on the fence. It’s with Syriza.

We will hear, as the Greek election approaches, ever louder warnings about irresponsible behaviour. But recklessness is not confined to the far left – the euro zone’s orthodoxy has been demonstrably reckless.

It has to be remembered that, bizarre as it seems, the Troika deals for Greece, Ireland and Portugal were based on a simple mathematical error. They got their sums spectacularly wrong in one crucial area – the “multiplier effect” that measures how badly severe reductions in public spending would affect the overall economy. Thus, for Greece, the Troika calculated that real GDP would fall by 3.5 per cent between 2009 and 2013 and that unemployment would rise to 15 per cent. The real figures were a fall of 21 per cent in GDP and a rise in unemployment to 27 per cent. (For Ireland, real GDP was supposed to grow by 5.4 per cent. It actually grew by 1.5 per cent. For Portugal, the projected fall was 3 per cent and the actual fall was 6 per cent.) The supposedly hard-headed technocrats turned out to be fantasists.

In this context, Syriza’s proposals for European debt resolution are not irresponsible. They are perfectly sensible. They don’t involve a writedown of sovereign debts and they don’t mean the German taxpayer having to bail out the Greeks or the Irish. What would happen is that the European Central Bank would buy all sovereign debt above 50 per cent of GDP and the countries involved would repay this debt when the debt ratio has fallen to 20 per cent. In the case of Ireland, this would park more than half our sovereign debt for perhaps 40 years. The immediate saving on debt service would be €3.7 billion a year, money that could be used to stimulate the real economy.

If Syriza wins, we will have for the first time a proper crisis. Crisis is a Greek word after all and it means a moment when things cannot continue as they were but must reach a new resolution.

1 ‘He was some man’: Shane’s journey from care child to fearless activist
2 Mary Lou has to call for the smelling salts as SF councillor deals a knock-out blow
3 Chris Hadfield on the climate crisis: ‘The world has seen much, much worse’
4 Netflix: The best 101 films to watch right now
5 St Michael’s conveyor belt showing no signs of slowing down
Real news has value SUBSCRIBE