Fintan O’Toole: Shame on us for forcing children to wake us up to climate change 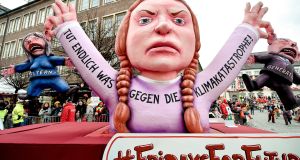 Are we so far sunk into indolence and fatalism that we need our own children to save us? The schoolkids’ strikes to demand action on climate change are both heartening and shaming. Heartening because they speak of a generation that is willing to fight for its own future. Shaming because they reverse the proper order of things. We adults are supposed to protect our children and grandchildren. It seems, however, that we need them to protect us.

I keep thinking these days of Pieter Breughel’s great painting Landscape with the Fall of Icarus. It deals with the ancient Greek story of Daedalus, who made wings of wax and feathers that allowed his beloved son, Icarus, to fly. The father warned the son not to fly too close to the sun, but in his delight and exuberance Icarus did so anyway. The wax melted, the wings lost their power and poor boy plunged to his death. The story has always been a warning about technological hubris and the need for humanity to understand and respect the limits of nature.

1 How one couple’s weekend away resulted in 30 Covid-19 cases
2 Taoiseach tells TD to ‘cop on’ over criticism of contact tracers asking about pubs
3 The Comey Rule review: You actually begin to root for Trump
4 Miriam Lord: Government’s latest comedy of errors offers little to laugh about
5 H is for hero: the origin story of Jack Reacher, a billion-dollar brand
6 Trump urges Proud Boys to ‘stand down’ after debate criticism
7 US presidential debate: who won, was it any good, were there any surprises?
8 Bloody Sunday decision on soldiers shows limits of ‘truth or justice’ model
9 Whistleblower warned EY of Wirecard fraud four years before collapse
10 Pierce Brosnan’s Malibu mansion on the market for $100 million
11 Meghan Markle’s flight is nothing new: it’s history repeating itself
12 Tour de France: Every yellow jersey winner must feel guilty by some association
13 Google tells workers to return to country where they are employed
14 ‘Mathematics seems too often to be about learning rules’
15 Food bank in Dublin’s working-class Bluebell feeding hungry hundreds
16 US presidential debate in quotes: ‘It’s hard to get any words in with this clown’
17 Coronavirus: 429 new cases as vigilance urged amid rises across the country
18 Indecisiveness led to home of The O’Rahilly being demolished
19 US election: Joe Biden and Donald Trump clash in chaotic presidential debate
20 Colleges may have to create 1,000 extra places after Leaving Cert errors
21 Coronavirus out of control in Britain, chief scientific adviser admits
22 Graham Norton: ‘I wanted out, out, out of Ireland’
23 Finn McRedmond: Trump v Biden charade still had some value
24 Irish food trade could slide by one-third if EU and UK fail to cut deal
25 Miriam Lord: Another dog’s dinner as D’Arcy jumps on the gravy train
26 Terrace in the shadow of O’Casey in East Wall for €395k
27 Brexit: UK to pilot second Bill overriding withdrawal agreement
28 Charlesland Golf Club set to close permanently in December
29 Pelosi tells Coveney no trade deal with UK if Belfast Agreement jeopardised
30 Subway bread too sweet for the Irish tax authorities
31 Council set to abandon €20m Liffey bridge plans
32 EU plagued by erosion of democracy inside and outside its borders
33 Spain to lock down Madrid as cases of Covid-19 surge
34 North: 424 new cases of coronavirus in highest rate since start of pandemic
35 Waste water firm Veolia increases bid for stake in rival Suez
36 New Octavia set to further cement Ireland’s enduring love affair with Skoda
37 Everything you ever needed to know about pension contributions
38 Leaving Cert: 6,500 students awarded lower grade due to code errors
39 Bill Gates: A three-part plan to eliminate Covid-19
40 Leaving Cert Q&A: How did the errors happen and will students get new CAO offers?
Real news has value SUBSCRIBE