Fintan O’Toole: Reboot and be damned – a temporary little arrangement?

Eddie Hobbs is from Mars and Lucinda Creighton is from Venus, hence the fuzziness of their new party’s agenda on everything from the role of the State to farming subsidies 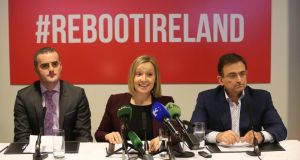 ‘The new party is a solution in search of problems – or at least of problems that can be can be addressed with right-wing policies that don’t appear to be too right-wing. Thus Eddie Hobbs (right) is from Mars and Lucinda Creighton is from Venus.’ Above, Hobbs and Creighton with John Leahy (left) at the launch of the party in Dublin. Photograph: Niall Carson/PA Wire

Reboot Ireland won out as the temporary name for Lucinda Creighton and Eddie Hobbs’s new political party over the proposed alternative, which was Have You Tried Turning It Off and On Again? But the permanent name is still undecided. The shortlist currently being market-tested is down to five: a) Feckenda (b) Foetus First (c) The Progressive Democrats (d) The Cape Verde Blues and (e) Operation Transformation.

To call Reboot Ireland fuzzy would be an insult to Gerry Adams’s teddy bear. The appeal of a new party – as opposed, say, to a looser affiliation of independents – is coherence. No one would expect detailed policies from a party that does not yet exist, but there has to be at least a common sense of direction, a shared set of gut feelings about Ireland and the world. The Progressive Democrats, for example, had origins similar to Reboot Ireland – a split within one of the main centre-right parties. But they had an ideology that roughly added up. They were against State regulation of both the economy and private life, a reasonably consistent, mildly libertarian position.

Thus Eddie is from Mars and Lucinda is from Venus. In 2012, Eddie wrote in the Wall Street Journal that Enda Kenny was the head of a “Vichy government”, making a comparison with the French regime that collaborated with the Nazis. Lucinda, of course, was a prominent collaborationist – as minister of state for European affairs, she was the primary messenger for instructions from Brussels. At no point when in that office did she exhibit the slightest anxiety about the Government’s twin-track policies of pouring billions into dead banks while taking billions from ordinary citizens. Does that make Eddie a collaborator’s collaborator?

Or consider a simple gut-instinct political question: are trade unions part of the problem with Irish society? Lucinda doesn’t seem to think so – “trade union officials” are one of the groups she specifically mentioned last week as potential leaders in the new party. She presumably sees them as decent and respectable members of civil society. But would these officials be, by any chance, related to the “tribe of insiders led by union godfathers”, against which Eddie railed in the same article? Does Lucinda’s appeasement of trade union officials make her one of the “political lackeys” of the “union godfathers” that Eddie denounced in a blog post in 2012 as “timid and self-serving cowards”?

Or consider an even more basic question: the role of the State. Eddie Hobbs writes, for example in the Sunday Independent last February, that “the oppressor is the State”. Eddie believes, as he has repeatedly written, that the goal of political reform should be to “lighten the burden of the State on the people”. This is pretty standard hard right-wing rhetoric – get government off our backs. But last week he and Lucinda were joined at the top table for the Reboot Ireland launch by John Leahy, who spoke of the need to “protect and promote” small farmers and rural life.

Now, as we know, small farms continue to exist only because of massive public subsidies. Rural life in general depends on subsidies for everything from post offices to transport. Which of these “burdens” of the oppressive State will the new party seek to remove? Does John Leahy even know that his new guru, Eddie Hobbs, is sickened by the “old-style protectionism demanded by the IFA [Irish Farmers’ Association]” and that what he calls “the food producer lobby” works by “nobbling the ref rather than competing for the ball”?

Eddie has, to be fair, a perfectly coherent Hobbsian programme for radical right-wing “reform”: slashing taxes, cutting public sector pay and numbers, reducing welfare benefits, closing subsidised services in rural Ireland, telling farmers to live or die by the market. But if Lucinda and her colleagues follow his ideas, the life of their party will be Hobbesian indeed: nasty, brutish and short.