The idea that talented people need to be incentivised to work to the best of their abilities by obscene salaries and bonuses is toxic at many levels. 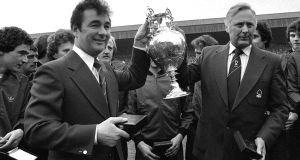 Brian Clough: “We’ve done it as I assume everybody wants to do their job: nicely, honourably and well.” (AP Photo/PA)

In the delicious recent documentary I Believe in Miracles, there’ s a clip of Brian Clough being asked how he and Peter Taylor had achieved one of the great feats of management: transforming a bunch of has-beens, never-weres, misfits and lost boys from a hopeless second division outfit to champions of Europe. Clough says: “We’ve done it as I assume everybody wants to do their job: nicely, honourably and well.”

Clough was to modesty what Casanova was to chastity, so he certainly wasn’t being modest. He was expressing, with his usual eloquence, a common assumption of the era before the Thatcher/Reagan revolution kicked in: that most people actually want to do their jobs well and do them honourably. You do your job to the best of your ability, whether you’re a football manager, a nurse, a teacher or a chief executive. Would Clough even have understood the notion that he had to be “incentivised” to achieve great things, that he did it all to secure a performance-related bonus?

How quaint Clough’s assumption seems now – especially that apparently archaic word “honourably”. In the world of inflated executive salaries – into which the staggering payments to Pat Smith at the Irish Farmers’ Association are only the latest little glimpse – honour is neither here nor there.

The idea that talented people need to be incentivised to work to the best of their abilities by obscene salaries and bonuses is toxic at many levels. Its most serious consequence is, of course, the return in western societies of inequalities of income not seen since the 1920s. But it injects a subtler poison: it dishonours work itself. It suggests that nobody works hard and well for any other motive than greed. It puts forward an especially bleak and narrow and mechanical view of human nature. It encourages the rest of us to have contempt for the aspects of our working lives that are not about money: the dignity of doing a job nicely and well, the esteem of our fellow workers, the belief that we are doing some little bit of good in the world, the simple pleasure of completing a task.

Of course everyone wants to make a decent living from their work. Of course we want to get something extra back if we spend time acquiring more skills or if we take on more responsibilities. Of course human beings are terribly interested in their status within whatever group they find themselves.

But we’re also complicated creatures. Our hunger for status can be satisfied in all sorts of ways, many of which have nothing to do with money. We want to be honourable and to be honoured.

Falstaff, after all, is a clown. Honour really is more than a word – we do the hardest things for it, from charging the enemy in battle to writing groundbreaking novels, to solving mind-bending puzzles in computer games.

Do people like Pat Smith ever go, for example, to a hurling match and ask themselves why Henry Shefflin developed such extraordinary skills and put himself though such punishing training regimes? Do they think that Shefflin was a worse hurler because he wasn’t paid a cent and that he would be a better one if he were paid as much as a Premier League footballer?

When Bernard Shaw was an obscure young clerk in the estate agents Uniacke Townshend on Bachelors Walk in Dublin, he was promoted to head cashier at double his salary. But it struck him that he would have taken the job even if the firm didn’t increase his salary because it had more prestige, the work was more varied and he liked having more responsibility. If, on the other hand, he had been offered the job of the charwoman who cleaned the office, “they would have had to overcome my repugnance to it by offering me a salary at least 20 times as large as they actually paid me after my promotion”.

The dignity of labour has to be more than a hypocritical sop to exploited workers. People who are set up as leaders have to show that they actually believe in it too.

Managers should remember that it’s an honour to hold a position of responsibility and that they’re lucky to have interesting, challenging, varied and fulfilling jobs. And that anyone who needs a bonus to do their job as well as they can isn’t fit to have it.

1 Ireland among countries urged to consider reinstating Covid-19 restrictions
2 ‘I’ve been sleeping with my girlfriend’s sister. I need help. What do I do?’
3 Maura Higgins: ‘I really hated it. Apart from that massage, the rest of it can kiss my ass’
4 Irish Michelin two-star restaurant to sell kebabs and fries from takeaway trailer
5 ‘No demand... because there are no people’ at well-known Dublin pub
Real news has value SUBSCRIBE