Fintan O’Toole: It is time for Sinn Féin to come in from the cold 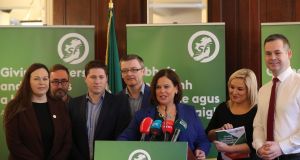 There can be no progressive government in Ireland without Sinn Féin. That is not a value judgment. It is merely a fact that anyone who wants to see radical change on the four great issues of housing, healthcare, climate change and child poverty has to face. If the polls are even vaguely right, Sinn Féin will be the overwhelmingly dominant force on the Irish left. To treat it as a political pariah is, in effect, to deny any serious possibility of breaking the duopoly that has created the status quo. This is an uncomfortable reality for many of us. But it is undeniable: to keep Sinn Féin out in the cold is to keep Irish politics frozen in its all-too-familiar postures.

In a sense, the decision on whether to bring Sinn Féin in from the margins of politics in the Republic has already been made. It was made in 2011 and it was made by the Labour Party. Labour’s decision to take office and implement an austerity programme that, for example, doubled child poverty, had an entirely predictable (and predicted) result: Sinn Féin would occupy the space where a traditional social democratic party should be. I think that was a terrible decision but so what? It happened, it had consequences and those consequences are now with us.

1 Woman (61) spared jail for cutting down 250 Coillte trees with chainsaw
2 Cork shootings: ‘Devastation was impossible to imagine’, funeral hears
3 Ireland outperforming almost all European countries in controlling Covid-19 spread
4 First full moon on Halloween night since 1955 will be rare ‘blue moon’
5 Storm Aiden prompts nationwide weather alerts for Halloween
6 The real Contagion virus is out there and it’s causing virologists to worry
7 Woman jailed for tax fraud had claimed relief for IVF treatment she never had
8 Murder inquiry opened into death of woman and her two children in Dublin
9 Revenue publishes list of companies tapping State for wage support
10 Surprised Donegal shopper discovers stowaway tarantula
11 Gates at Dublin’s Phoenix Park to close over weekends
12 Majority of Irish Covid-19 cases come from variant that originated in Spain – study
13 WHO raises alarm over widespread and enduring damage of Long Covid
14 Street preacher fails to halt trail over ‘singing and referencing Jesus’
15 Cosy and colourful: this Wicklow cottage is a décor delight
16 Two hundred Irish retailers for all your online Christmas shopping
17 The Movie Quiz: Maureen O’Hara was raised in which leafy Dublin suburb?
18 107 jobs at risk as Broderick’s shareholder considers examinership
19 Man found guilty of murdering girlfriend during drinking session
20 US election: ‘Trump would not be caught dead here unless he wanted our votes’
21 Trump vs Biden: Stakes are high for the Irish economy
22 Plans for Ireland’s tallest building rejected
23 The perfect traditional Irish barmbrack
24 No obstacle to publication of Mother and Baby Homes report, says Taoiseach
25 Back to brack: An easy Halloween bake
26 Nice attacker does not represent Islam, says Arab and Muslim leaders
27 Kanturk farm shootings: A timeline
28 Six Nations - France v Ireland: Kick-off time, TV details, permutations, team news and more
29 Cork shootings: Father and sons to be buried in two separate funerals
30 Trick-or-treat is cancelled but Ireland still billed as the ‘home of Halloween’
31 Sam Bennett struggles as Roglic wins Stage 10 of Vuelta
32 Kim Kardashian’s father appears in hologram for birthday present
33 Medical gaslighting: The women not listened to or viewed as overdramatising or catastrophising
34 How long can Government afford to keep State pension age at 66?
35 Coronavirus: Ballyjamesduff in Co Cavan over 5 times the national incidence rate
36 Michael O’Leary is selling 11-time Grade 1 winner Apple’s Jade
37 ‘Attention-seeking’ Shane Ross has a spiky joust with Regina Doherty
38 ‘Serious concerns’ expressed by council over Dublin 4 co-living development
39 ‘Clothes are not essential’: Minister Damien English defends retail restrictions
40 Six within 60: homes to buy within an hour of the M50
Real news has value SUBSCRIBE