Fintan O’Toole: Ireland can stop a no-deal Brexit. Here’s how 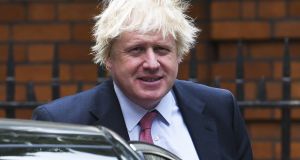 Boris Johnson: his Brexit campaign statement that the UK sends “£350 million a week to the EU” is the subject of a prospective court case. Photograph: Steve Back/Getty Images

Ireland, North and South, is facing a political and economic crisis. But the key to preventing it lies in Irish hands. One Irish political party has the power to change the balance of power at Westminster and to alter the dynamics of British politics, prevent a no-deal Brexit, avoid a hard UK-Ireland border and save the economy of Northern Ireland from catastrophe. It can do this without compromising its principles. All it needs is boldness, imagination and patriotism.

Boris Johnson’s radical right-wing administration has no effective majority in the House of Commons, even with the support of the DUP. But given the fragmented state of the opposition, Johnson may still be able to drive onwards towards the Brexit deadline of October 31st and over the edge of the cliff. There is one party that can stop him: Sinn Féin.

Sinn Féin holds seven seats at Westminster but leaves them vacant. Calling on the party to take those seats is rhetorically satisfying but pointless. In the first place, it has an impregnable argument for not doing so. It won these seats on an abstentionist platform. And it did so in 2017, when Theresa May was pushing for a very hard Brexit. Its voters knew the dangers and supported abstention anyway. That fact cannot be set aside.

And secondly, even if Sinn Féin was somehow able to make an immediate decision to occupy its seats when the Commons returns in September, the effect would probably be counterproductive. The Brexiteers and their media wing would generate hysteria about the Provos thwarting the will of the British people. Johnson would relish it. Wavering Tories would step back into line.

So, what’s needed, and needed urgently, is something much more imaginative: a pact among all the anti-Brexit parties in Northern Ireland – Sinn Féin, the SDLP, Alliance and the Greens. The agreement would have four basic elements. First, the seven Sinn Féin MPs will stand down temporarily, triggering byelections in Foyle, West Tyrone, Fermanagh & South Tyrone, Mid Ulster, Newry and Armagh, South Down and West Belfast. As it happens, all of these constituencies except Mid Ulster and West Belfast are bounded by the Border.

If the writs are moved on September 3rd when parliament returns from its summer recess, the elections could be held by the end of the month

The usual procedure at Westminster is that the party that held the now-vacant seat moves the writ for the byelection. Since Sinn Féin, by virtue of its absence, cannot do this, there would have to be an arrangement in advance for Labour or another party to do so. This should not be hard to arrange. If the writs are moved on September 3rd when parliament returns from its summer recess, the elections could be held by the end of the month.

Secondly, the four parties will agree a candidate for each of the seven constituencies. These candidates will not be aligned to any party, will command wide respect and will be drawn from civil society, academia, business and the arts. I would stress that I have not consulted any of the people I am about to suggest, but a purely indicative list might be look something like: former president Mary McAleese, former police ombudsman Nuala O’Loan, social policy expert Deirdre Heenan, former Ulster Farmers Union president Ian Marshall, actor Adrian Dunbar, former secretary general of the EU Commission Catherine Day, and trade and customs expert Katy Hayward.

Thirdly, these candidates will sign a public contract committing themselves to stand down as soon as Brexit is either accomplished or aborted, and not to seek re-election.

One reason for suggesting that the candidates be people who already have distinguished themselves in their own fields is to reassure Sinn Féin that they are not trying to build their own political bases. But if the party is still worried, there could be an extra safeguard – the candidates, if elected, will stand down at any time Sinn Féin chooses.

This last point is crucial. It is highly likely that Johnson will face a motion of no-confidence in the Commons and quite possible that he will lose it. But under the Fixed Term Parliaments Act of 2011, this does not automatically trigger a general election. There would be a period of 14 days after the vote during which an alternative government can be formed and seek to win a confidence vote.

It is unlikely that Jeremy Corbyn could command such a majority but quite conceivable that a less contentious figure such as Keir Stamer or Caroline Lucas could get enough backing to form a short-term unity government. This matters immensely because only a prime minister can ask the EU for an extension beyond the deadline of October 31st. Seven anti-Brexit votes from Northern Ireland would make this seismic shift much more feasible.

Two obvious questions arise: would the seven candidates win and what’s in it for Sinn Féin? Yes, they would win. The parties putatively backing them command between them an overwhelming majority of the vote in Foyle, West Tyrone, Mid Ulster, Newry and Armagh, South Down and West Belfast. Fermanagh & South Tyrone is narrower, but the anti-Brexit parties still have 54 per cent of the vote and a non-party figure could probably increase that total.

What would Sinn Féin lose? Just some money

What’s in it for Sinn Féin is an end to impotence. There is no Assembly or Executive in Belfast so it has no voice there, and it is highly likely that direct rule will be imposed by Johnson in September as a prelude to a no-deal crisis. It has no voice in Westminster, which has meant that the entire anti-Brexit majority in Northern Ireland has been silenced in the Commons too. And it has very little influence over Brexit policy in Dublin. Here, in one bold move, it can have an electrifying effect on the course of Irish and British history and in the process definitively end the perception that it is a party of protest rather than power.

What would it lose? Just some money. The party would be unable to claim, for a short time, the £100,000 (€109,000) or so in expenses it gets from Westminster annually. It seems a very small price to pay for the protection of the interests of so many people on both sides of the Border and the knowledge that when a historic challenge was posed, everyone who claims to have those interests at heart did all they could to meet it.

1 Conor McGregor stops Donald Cerrone in 40 seconds on UFC return
2 The cost of a Dublin cottage refurb: ‘We struggled with the mortgage lending rules’
3 I rationed sex in my marriage for 20 years - but since menopause, my libido has rocketed
4 Harry and Meghan will no longer be working members of British royal family
5 I’ve handed in my notice and I’m leaving Brexit Britain
Real news has value SUBSCRIBE