Fintan O’Toole: If theatre is not a safe space, what is left? 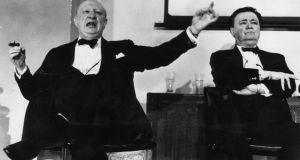 Gate Theatre founders Hilton Edwards and Micheál Mac Liammóir: The theatre has a special place in the history of the struggle for sexual equality and respect in Ireland. Photograph: The Irish Times

On Thursday, the Taoiseach gave his public backing to the Gate Theatre’s proposals to deal with concerns about alleged sexual harassment or abuse of power. These allegations, recounted online by a growing number of women, had led the Gate’s board to issue a statement promising to “listen to what people have to say and . . . foster a safe and supportive working environment”.

That evening I was taking part in a live broadcast from Dublin’s oldest theatre, Smock Alley. I couldn’t help remembering that Smock Alley was the scene of Ireland’s first great controversy about sexual harassment in the theatre. It happened 270 years ago and it is worth recalling because it gives the lie to the notion that objections to sexual harassment are a whole new thing, a product of modern political correctness.

On January 19th, 1747, a drunken Trinity College student, Edward Kelly, found his way backstage and accosted an actress, Mrs Dyer. He put his hands up her petticoats and tried to pry her legs apart with his knee. As Mrs Dyer later put it with considerable delicacy, Kelly said he “would do to her what her husband, Mr Dyer, had done to her, using the obscene expression”. Another actress rescued her and the two women locked themselves in a dressing-room. The actor-manager of Smock Alley, Thomas Sheridan (father of the great Richard Brinsley Sheridan) had Kelly thrown out. But he returned to the theatre and, amid a volley of abuse, threw an orange that hit Sheridan in the face as he was trying to perform. In an altercation after the show, Sheridan hit Kelly and broke his nose.

This ignited an enormous and violent conflict that transfixed Dublin for weeks. Kelly returned to Smock Alley with a gang and wrecked the place. Other students armed themselves and attacked Kelly’s supporters. At the heart of this tumult, there was a simple question: were women working in the theatre fair game? To Kelly and his gang, any woman who went on stage was, to put it in our terms, asking for it. To Sheridan and his supporters, actresses were working professionals, entitled to protection. And in a landmark case, a Dublin jury sided with Sheridan and implicitly with the assaulted Mrs Dyer: Kelly was fined the considerable sum of £500 and sent to prison for a month. A line had been drawn: no, people working in the theatre are not fair game for sexual abuse.

The current damburst of allegations of sexual intimidation, uninvited touching and bullying has flooded into many areas of life, from media and fashion up to the highest levels of British politics, where it has carried away the defence secretary Michael Fallon. But it started in theatre’s sister industry, with the appalling allegations against one of cinema’s most powerful men, Harvey Weinstein. And, though the scale and seriousness of the allegations differ very widely, it has seeped into the world of theatre on these islands.

Kevin Spacey, though best known as a film and TV actor, ran one of London’s major theatres, the Old Vic, as its artistic director for 11 years and faces allegations of sexually harassing male actors there. Max Stafford-Clark, rightly revered for his work in fostering and staging new writers as artistic director of the Royal Court from 1979 to 1993, has been forced to resign from his independent company, Out of Joint, following allegations of persistent lewd comments to women working under him. And now one of Ireland’s leading theatres, the Gate, has come under increasingly uncomfortable scrutiny in relation to the experiences of women during the period when Michael Colgan was its charismatic and highly successful director.

That the Gate is now in the spotlight brings out a particular irony. The theatre has a special place in the history of the struggle for sexual equality and respect in Ireland. For decades, its founders Micheál Mac Liammóir and Hilton Edwards were Ireland’s only openly gay couple. That they got away with being gay in a bitterly repressive society was a mark of a broader assumption about the theatre: that it is a place where people are freer and less subject to discrimination or sexual belittlement. Yet what we are now hearing are the voices of women – and, in the case of the Old Vic, men – whose experiences make a mockery of these assumptions.

The behaviour that is now being alleged cannot be excused by claiming that it all happened in a different era when everybody thought it was just good fun. If there was that different era, it was a very long time ago, before 1747. Nor can it be excused by claiming that the theatre is a febrile place, where emotions are raw, egos are fragile, sexual tension is in the air and acting out thoughts and fantasies is the daily business. On the contrary, it is precisely because some of this is broadly true that people who work in the theatre need the protection of clear boundaries.

The real question is this: how has silence prevailed for so long in a world full of brilliant, articulate, demonstrative people? The answer is, of course, power and vulnerability: godlike bosses on the one side and on the other people with no security of employment. It’s actually the same answer that applies to much less glamorous worlds. But it points to the larger reality: if this behaviour and this silence can take root in the free space of the theatre, they can happen anywhere.

1 Admission of mistake in Oxford vaccine dose raises doubts over reliability
2 Michael J Fox: ‘In the wheelchair, I’m luggage. No one listens to luggage’
3 Saoirse Ronan and Daniel Day-Lewis on ‘greatest 21st-century actors’ list
4 The Crown’s Josh O’Connor: ‘I’m a republican. I’m not interested in the royal family’
5 Helen McEntee holds up well for someone with barely a leg to stand on
Real news has value SUBSCRIBE