Fintan O’Toole: How gang of four runs the country 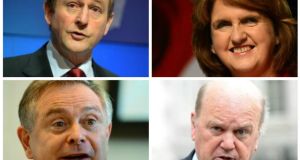 Who claimed in The Irish Times in July 2013 that the Economic Management Council (EMC), the gang of four that makes most of the important Government decisions, was a “major fear” because it was potentially “dominated by civil servants and policy advisers”?

And who wrote in the Sunday Business Post last Sunday that such claims are “absurd” and “rhetoric running way ahead of reality”?

The first quote is from Joan Burton, leader of the Labour Party and now a member of the EMC. The second is from party colleague and fellow EMC member Brendan Howlin. And they wonder why people struggle to believe anything they say.

The complaint was part of an internal jockeying for power and therefore has the status of a temporary truth, a reality that is real only for so long as it is useful. Howlin did not tell us at the time that Burton’s fears were “absurd”, presumably because he viewed them as just another part of the political game.

But the same views become absurd when they are expressed by me or by anyone else who is not in the game.

Howlin’s article on the EMC was written, he said, in response to remarks I made in an Irish Times podcast with Pat Rabbitte to the effect that the EMC is a “threat to cabinet government”.

I did indeed make those remarks and I’ve argued since it was established that the EMC epitomises the failure of the “democratic revolution” the Government parties proclaimed as an urgent necessity.

Instead of devolving power to the people, the Government created a new institution described by political scientist Brigid Laffan as one of “unparalleled political authority and power”.

This was done without a democratic mandate. If the Government believed it needed a new institution of State, comprising the Taoiseach, Tánaiste, Minister for Finance, Minister for Public Expenditure and whatever experts and advisers they might invite to the table, it should have put a proposal for constitutional change to the people.

Article 28.4.2 of the Constitution is absolutely clear: “The Government shall meet and act as a collective authority.” There is no subclause that says this collective authority can be devolved to a subgroup with an arbitrary, unaccountable membership.

That the membership of the EMC is indeed arbitrary is confirmed by Howlin in his Sunday Business Post article. He tells us that “political advisers attend” but that sometimes they don’t.

He gives a seemingly random list of office holders who may or may not be at EMC meetings: the secretaries general of the two finance departments, the head of Revenue “or the head of the NTMA [National Treasury Management Agency] or the secretary general of the Department of Foreign Affairs”. Or, in principle, the resident conductor of the National Symphony Orchestra or the head chef in the Dáil restaurant or the head of a multinational corporation or the winner of Celebrity Bainisteoir.

The most powerful arm of State has been constructed in a such a deliberately fluid and ad-hoc manner that it is impossible to define its membership. What you can’t define, of course, you can’t hold to account.

But, says Howlin, this doesn’t matter, because the EMC doesn’t have any powers of its own. It is just an ordinary Cabinet subcommittee: “All decisions at the EMC are referred to the full Government for decision.”

The repetition of “decision” here is telling. The full Cabinet gets to “decide” on “decisions” that have already been made at the EMC.

This, presumably inadvertently, is a classic description of rubberstamping. And we know this to be so: to give just one example, the recent changes to the water charges were reported by every media outlet, on the basis of official briefings, to have been “signed off” by the EMC. I would like Brendan Howlin to give us one example of the Cabinet un-signing off a decision made by the EMC.

In fact, though, it’s much worse than this. It is not even true that the Cabinet gets to rubberstamp all EMC decisions. In his fascinating recent book An Education, John Walshe details his experiences as an adviser to the former minister for education Ruairí Quinn. Walshe records some decisions made by the EMC without reference to the Cabinet at all.

He quotes, for example, from Quinn’s diary, on a proposal to raise the pupil-teacher ratio, that “the EMC decided to eliminate the proposal and fund the gap with taxation”. Howlin should tell us whether his colleague Ruairí Quinn was deluding his own diary or whether he himself is being forgetful when he says that all EMC decisions are referred to the full Cabinet.

The most basic question in a democracy is: who rules? We know it’s not us, but they won’t even tell us honestly which of them it is either.