Fintan O'Toole: Gove's cocaine use may explain his attack on the peace process 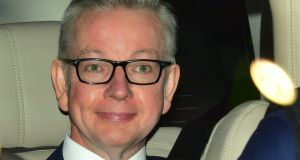 So now we know: it was the drugs. Michael Gove, a key figure in the creation of Brexit and a contender to be the next British prime minister, was dosing himself with cocaine before writing his columns and pamphlets “about 20 years ago”. That is when he published a long polemical essay called The Price of Peace. It is an important document. Gove is what passes for the intellectual driving force behind Brexit. The Price of Peace is an attack on the Belfast Agreement. If you want to understand the inherent hostility to the peace process that is at the heart of the Brexit project, you have to read it.

Knowing what we now know, it is easy to see at least some of these effects in Gove’s polemic

But now, you can read it as a set of symptoms. Which of us, at some point in our lives, has not had to utter those mortifying words prompted by some painful memories of offensive nonsense spouted the night before, “Oh God, I’m so sorry. It was the drink talking”? We can now, surely, look forward to the Brexiteers shame-faced apology for the drivel they have spouted about Northern Ireland – that wasn’t really Michael, it was just Charlie talking.

1 Coronavirus: From midnight Dublin will move to level three until October 10th - Taoiseach
2 Wife not entitled to deceased husband's entire estate, High Court rules
3 Life in Level 3: What will happen under new restrictions in Dublin?
4 Stephen Donnelly dodges the questions as Matt Cooper mercilessly pursues the answers
5 ‘We are shell shocked’: Dublin restaurants angry over indoor dining ban
6 Michael McDowell tells Seanad he has ‘no confidence’ in NPHET
7 Golf group insist they adhered to public health guidelines during Tullamore trip
8 Cluster among golfing group in Midlands a 'significant Covid-19 incident'
9 Liverpool close to agreeing deal to sign Wolves forward Diogo Jota
10 Rest of country can ‘transit’ through Dublin for overseas travel
11 English ‘chumocracy’: Boozy weekends and class disdain with the Camerons
12 Sam Bennett signals final intention of winning green in Paris
13 President Higgins says British must face up to their history of reprisals
14 Gardaí investigating after woman throws smoothie over Leo Varadkar
15 Aldi empire wracked by family feud
16 Coronavirus: 253 more cases and three further deaths reported in State
17 Diarmaid Ferriter: Those in Downing Street have no regard for the North or the DUP
18 Thousands of third level students in Dublin to have limited access to college campuses
19 Teenager who stabbed 18-year-old in a Dublin park found guilty of manslaughter
20 Pat Smullen was as a ‘fighter’ who always did his best, funeral service told
21 Will PTSB be Ulster Bank’s knight in shining armour?
22 Covid-19: Garda presence in Dublin to be significantly increased
23 Raab’s US visit amplifies Democratic support for Irish
24 Coronavirus is out there, seeding widely, and things will get worse
25 Coronavirus: Indoor dining, weddings, funerals, travel to be hit as Dublin set for Level 3
26 Cliff Taylor: What permanently low interest rates mean for you as a saver or borrower
27 Dublin restrictions will lead to ‘economic meltdown’ in hospitality sector – RAI
28 Coronavirus: NPHET letter to Government warns of ‘extremely critical juncture’ for Dublin
29 Major traffic increase on roads around Dublin break 2019 records
30 We pictured idyllic summers, colour schemes, playrooms for the kids. Then we saw the house
31 NatWest considers closing Ulster Bank in the Republic
32 Coronavirus: WHO warns of ‘alarming’ spread across Europe
33 ‘We poured our hearts and souls into it’: Last orders as landmark pubs and restaurants sell up
34 Tracing your Irish ancestors? These records might help
35 Fiona Bruce in a Spitfire is a Brexiteer’s fever dream
36 Van Morrison’s anti-lockdown songs: ‘No more taking of our freedom, And our God given rights’
37 Culture Night 2020: From a Liffey tour to Cork slang lessons, 30 events not to miss
38 Living with Covid plan: What is in each of the five levels?
39 Leo Cullen says ‘fresh energy’ behind big Leinster selection calls
40 HSE turns down request from Britain to process tests in Irish laboratories
Real news has value SUBSCRIBE