Fintan O’Toole: Child with Down syndrome will be face of anti-abortion campaign 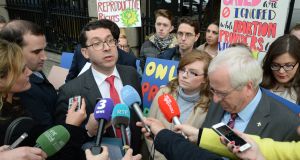 Rónán Mullen outside Leinster House last October. “We have a tradition here in Ireland where children with Down syndrome are perhaps more cherished than in many other countries,” he has claimed. Photograph: Dara Mac Dónaill

The face of the campaign against repealing the Eighth Amendment will not be a Catholic bishop. It will be a delightful smiling kid with Down syndrome. You can see her in the glossy pamphlets already delivered to homes by the apparently well-funded Love Both group. Her lovely face smiles out at us under the banner headline: “90 per cent of babies diagnosed with Down syndrome in Britain are aborted.” It is a viscerally powerful message: repealing the Eighth is the gateway to a eugenic project in which people with Down syndrome (DS) are engineered out of existence. It’s also an argument that deserves to be treated with respect. To dismiss it merely because it is uncomfortable is both wrong in itself and, for the repeal movement, potentially dangerous.

Any campaign has to be able to take on its opponents, not on their weak points, but on their strongest grounds. Those grounds have changed radically. When the Eighth Amendment was introduced in 1983, it represented things that no longer apply: the political power of the Catholic church, the attempt to stop the liberalisation of Irish social and sexual mores. So the campaign for repeal must not make the classic mistake of fighting the last war. The threat of the “screening out” of people with DS will be at the centre of the new discourse – and those who want repeal had better be ready to address it.

7 Mary’s story: Roscommon woman believed a lifetime of exile was as it should be

8 Trump prepares to leave for Florida before Biden inauguration

9 David McWilliams: What a Doc Martens boot can teach us about the wealth gap

11 Luke O’Neill: Scientists have delivered against Covid-19. Now the politicians need to

12 Netflix has spent millions on its films, so why are they so mediocre?

13 Miriam Lord: Why did the secretary general cross the road? Because he’s worth it

21 Covid-19: Nursing homes to be prioritised for vaccination for 10 days amid supply shortage

22 Meal Box Review: A Chinese takeaway you will never tire of

25 Q&A: Covid-19 new variants in Ireland - everything you need to know

26 Pete Lunn: We need to tackle Covid-19 differently after this lockdown. Here is how

27 The only four skincare products you need

28 Maureen Gaffney: The land of the mother and baby homes

29 No, you can’t use the bathroom, Jared and Ivanka tell their Secret Service agents

35 Ireland’s vaccine rollout: Can we stay at the top of the EU league table?

39 AIB plans ‘ethical’ sale of up to 650 distressed mortgages