Fintan O'Toole: Are the English ready for self-government?

The Irish Times columnist Fintan O'Toole explains what he thinks is driving support for Brexit in the UK, during a recent lecture at University College Cork. Video: UCC Ireland 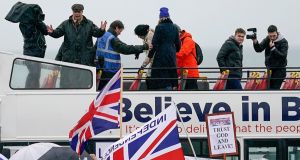 Former Ukip leader Nigel Farage addresses marchers from a pro-Brexit bus: Brexit is a dead horse, a form of nationalist energy that started to decompose on June 24th, 2016, as soon as it entered political reality. Photograph: Christopher Furlong/Getty

“The alleged aptitude of the English for self-government,” wrote Bernard Shaw in his preface to Androcles and the Lion, “is contradicted by every chapter of their history.” Shaw was, of course, parodying British imperialist rhetoric and its insistence that lesser peoples – including his own nation, the Irish – were not ready to govern themselves. He was being naughtily provocative, which only the most irresponsible of commentators would dare to be in these grave times.

But there is nonetheless some tinge of truth in his words. Aptitude for self-government is not what comes to mind when one looks in from the outside at the goings-on in Westminster last week, when, as Tom Peck so brilliantly put it in the London Independent, “the House of Commons was a Benny Hill chase on acid, running through a Salvador Dali painting in a spaceship on its way to infinity”.

Let’s just say that if Theresa May were the head of a newly liberated African colony in the 1950s, British conservatives would have been pointing, half-ruefully, half-gleefully, in her direction and saying “See? Told you so – they just weren’t ready to rule themselves. Needed at least another generation of tutelage by the Mother Country.”

There is a surreal kind of logic to this. If, as the Brexiteers do, you imagine yourself to be an oppressed colony breaking away from the German Reich aka the European Union, perhaps you do end up with a pantomime version of the travails of newly independent colonies, including the civil wars that often follow national liberation.

And without wishing to rub it in, Shaw’s quip does point up two of the deep problems that underlie, and undermine, the whole Brexit project. First, the problem of this imagined effort at self-government is the “self” bit. What is the self of the British polity? As in all nationalist revolts, the easy bit of “Them against Us” is Them: in this case the EU. The hard bit is Us. Brexit appeals to a collective British self but it is itself the most dramatic symptom of the unravelling of that very thing.

The anarchy at Westminster is the political expression of anarchy in the UK, the sundering of a common sense of belonging. Brexit is a fabulous form of displacement – it acknowledges a profound and genuine unhappiness about how the British are governed but deflects it on to Europe.

It has merely marked out in bright red ink the fault-lines that have long been less vividly present – the drifting apart of England and Scotland; the economic and cultural divide between what Anthony Barnett calls “England-without-London” and the rest of the UK (Wales being the obvious anomaly); the social and geographic rifts between the winners and losers of the long Thatcherite revolution. Brexit, in a worst-of-all-worlds moment, brings all of these divisions to a head while doing absolutely nothing to address them. It reveals a polity that cannot create consensus because it lacks a foundation in social consent.

The other, closely related, problem is the English nationalism that is at once such a powerful force in Brexit and so poorly articulated. As every former colony knows, nationalism is a great beast for carrying you to the point of independence – and then it becomes a dead horse. Shaw wrote to his friend Mabel FitzGerald (mother of the future taoiseach Garret) in December 1914: “Even the subject nations like Ireland must never forget that the moment they gain home rule, the horse will drop down under them, and reveal, by a sudden and horrible decomposition, that he has been dead for years.”

Brexit is a dead horse, a form of nationalist energy that started to decompose rapidly on June 24th, 2016, as soon as it entered the field of political reality. It can’t go anywhere. It can’t carry the British state to any promised land. It can only leave it where it has arrived, in a no-man’s land between vague patriotic fantasies and irritatingly persistent facts. But equally, because of the referendum result, the British state can’t get down off the dead horse and has to keep flogging it.

Hovering over this whole idea of English self-government is the myth of standing alone. All independence movements have at their core the meaning of Sinn Féin – “Ourselves Alone”. Standing alone is also one of the great motifs of the English self-image, brilliantly visualised in David Low’s famous cartoon of June 1940, after the fall of France, showing a Tommy standing on the cliffs of Dover shaking his fist at the Luftwaffe bombers overhead with the caption “Very well, alone”. But Britain was not alone then (it had a vast empire) and it has never been alone. In its entire history since 1707, it has always been part of a larger multinational entity: empire first, then Europe.

Yet a fantasy of glorious, defiant aloneness is at the heart of Brexit’s wish-fulfilment. It is a great warning about being careful what you wish for. What we are seeing at the moment is a sneak preview of England standing alone. It is not surprising that it is a preview of a horror show. For when you really are alone, what are you alone with? You are alone with your demons.