Finn McRedmond: Do not mistake progress for resolution 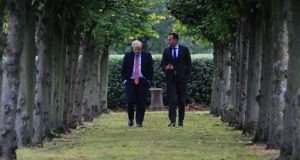 Tragedy follows a simple structure: a series of events build towards a climax, followed by a turning point which changes the fate of the protagonists, and then a final act where conflicts are resolved and the reader is left with a sense of catharsis.

It doesn’t deal with what happens afterwards, when normal life resumes. The first wisps of white smoke emerging from Brexit negotiations might seem like the grand denouement we have all been waiting for, but what happens next?

“Get Brexit done” was the theme of this year’s Conservative Party Conference. And although just two weeks ago reaching any kind of consensus for a deal seemed light years away – with Boris Johnson’s proposals declared dead on arrival by all on the other side of the negotiating table – it seems, against all odds, that a deal might be achievable.

Ratifying a withdrawal agreement will signal the beginning of more negotiations – and the accompanying false flags, blame games and parliamentary battles

On Tuesday an anonymous No 10 staffer – largely believed to be Dominic Cummings, Johnson’s chief advisor – released a memo accusing Leo Varadkar of reneging on his promises and refusing to negotiate in good faith. It threatened to withdraw security co-operation with Ireland too. Anglo-Irish relations hit a nadir.

But on Thursday Varadkar and Johnson spoke in private for three hours in the comfortable surrounds of a Cheshire mansion, with advisors joining at the end. Cummings, recognising the importance of the occasion, shunned his deliberately provocative attire of wrinkled shirts and oversized gilets for a conventional suit.

And judging by the refreshingly unexpected optimism of both leaders after the meeting, it seemed Brexit has reached a turning point.

But, a turning point is the most this could be – one in a long saga that will unravel for years to come. Despite the government’s rhetoric about getting Brexit done, agreeing and (whisper it) ratifying a withdrawal agreement will simply signal the beginning of more negotiations – and the accompanying false flags, blame games and parliamentary battles. Catharsis is a long way off.

Exactly how this deal might look – if it ever appears – is being kept tightly under wraps. But the shape appears to be crystallising.

One way forward would be for Northern Ireland to leave the customs union along with the rest of the UK, but apply EU tariffs to goods coming into the North destined for sale in the Republic and the rest of the EU. The arrangement would be complicated and difficult to administer.

Frictions between Northern Ireland and Great Britain would emerge. And the long-term consequences are impossible to assess because this is not something that has been tried before.

While this would lose the support of the DUP, Johnson and Cummings’s calculation will be that this deal would be passed by a minority of opposition MPs. Cue the general election, with Brexit filed neatly in the “done” folder and a Johnson government able to parade triumphantly its big-spending domestic agenda.

Except that’s not how this will work. Passing a deal doesn’t amount to Brexit’s completion. It points towards, but doesn’t necessarily guarantee, an election victory for Johnson.

It doesn’t resolve the fractures that have emerged in the Tory party. And the huge resentment that has been building in the UK – fuelled by the government – will emerge with renewed force as soon as it becomes clear that Brexit itself is a long way off resolution.

And away from the election – whatever the outcome – parliament will move on to figuring out the next stage, trying to find a consensus on tariffs, customs, regulatory alignment and everything that will have to be resolved in the future UK-EU relationship.

Not to mention trying to negotiate free trade arrangements with countries further afield. With a country even more polarised on the place of the UK in the world than it was when the Brexit question was posed back in 2016.

If Johnson fails to deliver a thumping majority then the atrophy that has taken hold in British political life for the past three years will simply continue to grow more toxic, as Labour – itself divided – stays at the throats of the Conservatives, and the so-called Eurosceptic Spartans claim betrayal in a bid to stay relevant now their raison d’etre is slipping out of their grasp.

That the EU27 have given the green light for continued negotiations, and that striking a Brexit deal begins to look more likely than not, is important progress.

But now more than ever it is important to remember that passing a deal is but the first stage in a long struggle. And the forces that Brexit has released into the fabric of the UK’s political life will endure.

Despite the constant briefings and counter-briefings, Johnson’s attempts to point the finger at anyone but himself over the breakdowns in negotiations, and the ill-will stirred up between Dublin and Westminster, and Westminster and Brussels, the relationship between all three is as vital as ever.

There are trade deals to work out, powersharing to be restored, and relationships to be maintained. Progress, yes. Resolution, nowhere close.