Potential merger with SDLP represents a complete break with the past 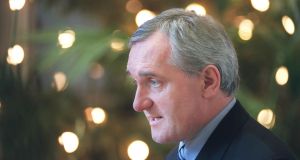 Not until 2007, more than 80 years after the party’s establishment, did Fianna Fáil – under Bertie Ahern – announce plans to remodel the organisation as a 32-county party. Photograph: Alan Betson

Recent reports in the media that Fianna Fáil is to merge with the SDLP in a move that would see the parties initially stand on a joint platform for next spring’s local and European elections represents a major U-turn regarding the party’s traditional stance on contesting elections in Northern Ireland.

Since Fianna Fáil’s establishment in 1926, conservative leaders from Éamon de Valera to Albert Reynolds refused to extend the party into Northern Ireland. In fact, not until 2007, under the direction of then leader and taoiseach Bertie Ahern, did Fianna Fáil officially register with the UK Electoral Commission as a Northern Ireland political party.

For many rank and file party supporters, the Fianna Fáil leaderships’ continued refusal to remodel itself as a 32-county party represented a paradox. After all, Fianna Fáil’s raison d’être is to secure a united Ireland. The orthodox policy for such a party would be to organise throughout the island and fight elections in both jurisdictions.

Yet, at the inaugural Fianna Fáil Ard Fheis in 1926, de Valera categorically ruled out the extension of the organisation into Northern Ireland, arguing that the party should leave aside any ambitions of contesting Northern Ireland elections until Fianna Fáil secured a “political victory” and entered government in the South of Ireland.

However, on entering government in 1932, de Valera again ruled out extending Fianna Fáil into Northern Ireland. Although he won a seat as an abstentionist MP for South Down in 1933, this was an isolated case. For the remainder of de Valera’s leadership, until his retirement in 1959, Fianna Fáil remained committed to not remodelling the party on an all-Ireland basis.

Lemass adhered to this policy throughout his eight years as Fianna Fáil leader. Speaking at the 1964 Ard Fheis, for example, he rejected a resolution from the party’s grass-roots demanding that Fianna Fáil be extended into Northern Ireland on the grounds that it would be conceived by Ulster Unionists “as a kind of Southern interference in the North’s affairs”. Arguably, the Fianna Fáil government’s reluctance to interfere with the political status quo within Northern Ireland was understandable as at this time Lemass was encouraging co-operation between the Dublin and Belfast governments.

During the respective leaderships of Jack Lynch, Charles Haughey and Albert Reynolds, which coincided with the worst years of the Northern Ireland conflict, the prospect of extending Fianna Fáil across the border was deliberately submerged beneath the political undergrowth.

It was widely felt within Fianna Fáil circles that the party’s participation in Northern Ireland politics at this time would have further split a fragmented nationalist electorate, which already had to contend with the SDLP and Sinn Féin.

In particular, the Fianna Fáil hierarchy was wary of policy initiatives that might undermine the SDLP during the early years of the fledgling Peace Process in the late 1980s and early 1990s. As Dermot Ahern explained, Fianna Fáil did not wish to place a “dagger” in the back of the SDLP and its moderate brand of constitutional nationalism.

Not until 2007, more than 80 years after the party’s establishment, did Fianna Fáil announce plans to remodel the organisation as a 32-county party. The catalyst for Bertie Ahern’s decision was in response to the signing of the St Andrews Agreement in 2006. Although devolution of policing and justice powers to the Northern Ireland assembly remained unresolved, in the aftermath of the agreement, the DUP and Sinn Féin took the momentous decision to enter a power-sharing executive with one another.

With the Northern Ireland executive up and running, under Ahern’s successor Brian Cowen, Fianna Fáil went ahead with its plans to cross the Border. In July 2010, Cowen visited Crossmaglen, south Armagh, to officially open a Fianna Fáil office in the town.

Fianna Fáil’s plans to contest elections in Northern Ireland, however, were dealt a dramatic blow following the party’s crushing defeat at the 2011 Irish general election. Fianna Fáil’s humiliating relegation to the opposition benches, under the party’s new leader Micheál Martin, meant that there were very few resources, or indeed appetite, to continue with Bertie Ahern’s one-time master project of remodelling the party on an all-Ireland basis. As a result, Martin ordered the shelving of this proposal.

Although over the past several years, Martin has routinely mooted the potential for Fianna Fáil to eventually enter Northern Ireland politics, his recent discussions with the SDLP regarding a possible merger between the two parties has brought the issue back into the public domain.

Why now? The obvious answer is that in the context of Brexit Fianna Fáil feels threatened by the growing electoral strength of Sinn Féin on the island of Ireland. Martin, therefore, views Fianna Fáil’s potential entry into Northern Ireland as a useful policy in his battle with Sinn Féin for the hearts and minds of the electorate in the Republic of Ireland.