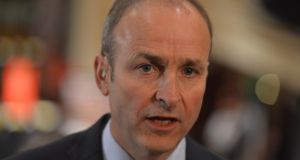 In 2014, Micheál Martin said: “We made mistakes before,saying that Fianna Fáil was going North, but frankly, there wasn’t anything behind it in terms of capacity. That won’t happen under my leadership.” Photograph: Michael Mac Sweeney/Provision

In electoral terms neither the SDLP nor Fianna Fáil have their troubles to seek.

At the election to the new Assembly in June 1998, the SDLP topped the poll –for the first time ever– although the vagaries of the PR system saw them slip four seats behind David Trimble’s UUP. They also had three MPs and were comfortably ahead of both the DUP and Sinn Féin on local councils. Their average vote back then was 166,000.

They have no MPs now. They have slipped to third or fourth positions in recent elections and their average vote is 92,000. Their leader, Colum Eastwood, is young and affable, but there is no evidence that he will be able to make the party electorally relevant again.

Fianna Fáil’s decline hasn’t been quite as catastrophic as the SDLP’s; but after almost 80 years as the largest party, with 74+ seats in the Dáil and an average 43 per cent of the vote, it is down to 44 seats and 24 per cent. Micheál Martin is under enormous pressure from Leo Varadkar and Mary Lou McDonald, as well as elements within his own grassroots. Like Eastwood, he needs to find ways of making his party electorally relevant again.

Working together has to mean more, much more, than just some sort of electoral pact

In an interview with Martin in February 2014, I asked him about his party fielding candidates here: “The first phase of our engagement was policy. The next stage has to be electoral. But we have to be very incremental: it isn’t going to be a big bang. We made mistakes before,saying that Fianna Fáil was going North, but frankly, there wasn’t anything behind it in terms of capacity. That won’t happen under my leadership. When I make a step forward it has to be with a bit of beef and bodies and a campaign plan.”

The present negotiations with the SDLP suggest that he and Eastwood have reached the stage at which the beef and the campaign plan are on the table. Given the fact both face challenges from Sinn Féin and that Brexit has focused attention on Irish unity and the possibility of a Border poll, it makes sense for them to be talking about ways of working together. But working together has to mean more, much more, than just some sort of electoral pact. Pacts, particularly when there are two countries involved, can be extraordinarily difficult to pull off. And nor does it make sense for Fianna Fáil to stand under its own banner in Northern Ireland, for that would simply damage, possibly even destroy the SDLP – as well as helping Sinn Féin.

A merger would certainly be a bold move, but it is probably the only way Fianna Fáil will get electoral traction in the North in the short term. But an electoral pact is also difficult to promote and would certainly muddy the water in terms of the Border and two states. If it isn’t an all-island political/electoral entity that emerges at the end of the negotiating process then it will be mocked by Sinn Féin and probably by Fine Gael, too.

How would unionists react to an SDLP/Fianna Fáil merger? Badly

Of course a merger raises existential difficulties for the SDLP: for what it seems to be facing is a slow, lingering death over the next few elections, or getting swallowed up by a bigger party. The problem for the SDLP is that is has failed to set out a clear role, relevance, purpose and direction for itself since it was first eclipsed by Sinn Féin in November 2003. Too much time is taken up in increasingly bitter squabbles with Sinn Féin, while the remaining time is consumed by internal squabbles (the abortion referendum split the party) and pointless talk of “we did the heavy lifting in the 1990s”. Yet none of that matters if the voters are drifting from you in increasing numbers.

How would unionists react to an SDLP/Fianna Fáil merger? Badly. They don’t like having to deal with the all-island agenda promoted by Sinn Féin and they certainly don’t want to have to deal with another manifestation of the “unity project”. If, as seems likely, the new entity would win enough seats to entitle it to places in the NI Executive, that would seriously spook them. And it would certainly kill off any prospect of the repeat of the Opposition arrangement between the UUP and SDLP in 2016.

It wouldn’t be long before talk of a new pan-nationalist front emerged; and it’s likely that this would be followed by statements from across unionism that the SDLP/Fianna Fáil were simply preparing for a border poll and trying to “out-green” Sinn Féin. In other words, a merger could prove to be very destabilising for the political process in Northern Ireland; as well as pushing unionists into their own broad-based, permanent pacts.

But needs must. Both parties have to do something to make themselves interesting and relevant. Brexit upended the political dynamics on both sides of the border and raised questions and challenges, which no one had prepared for. It is clear that Fianna Fáil is serious about contesting elections here, but doing it in a way that helps rather than hurts the SDLP. So a merger is the logical solution.

But the risks are enormous. So enormous, in fact, that both parties might pull back and settle for something much more modest. Here’s the bottom line, though: the SDLP, alone, is no match for Sinn Féin in the North and Fianna Fáil needs something very big to unsettle Sinn Féin’s progress in the South. A merger covers both bases.