Abbas appears to be repudiating idea of right of return 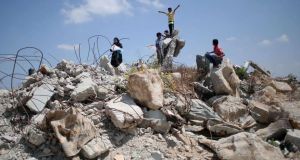 Out of this desperation will IS find a base? .... Palestinian children play in the rubble of houses destroyed during the Gaza war between Israel and Hamas militants in the summer of 2014 Photograph: Said Khatib/AFP/Getty Images

One of the more puzzling aspects of the politics of conflict in the Middle East has been the failure of Islamic State to take up the cause of the Palestinians. But that may be changing, with unpredictable but predictably unhappy consequences for a region which already resembles a jig-saw exploding slowly in a downpour of blood.

On the face of it, Palestinians, living in teeming, fetid refugee camps, or imprisoned in Gaza under constant threat of another Israeli onslaught, or subjected to an apartheid regime in the West Bank, or sick for home in scattered exile around countries which would be happy if they’d just disappear to anywhere, in despair of ever being able to return to the homes from which their families were ethnically cleansed in the Nabka (catastrophe) of 1948, might seem suitable cases for recruitment by IS.

During the last attack on Gaza, however, a video was posted showing IS fighters burning a Palestinian flag. They were making their point in typical dramatic style: the only goal which matters is the creation of a single caliphate across the Islamic world. To succumb to the lure of a separate national state is to deny the divine mission of all true Muslims.

The priority has been by massacre and expulsion to “purify” the population.

Corrupt regimes masquerading as Islamic must be wiped away as obstacles to realisation of the caliphate dream. IS includes not just Saudi Arabia, the Gulf States, Egypt etc. in this category, but Hamas and the Palestinian Authority. Jihad can be waged only under a leadership approved by a competent religious authority – which in this case, in the first instance, means IS leader Abu Bakr al-Baghdadi.

The perspective may seem crazy to Westerners, as it does to many millions of Muslims. But it might have ready appeal to young Palestinians feeling the daily pinpricks of humiliation in the abandoned lives they are forced to lead.

Any who manage to leave, to attend college, for example, are barred from re-entering the country. Exiled from exile.

Wherever fate has blown them, they read and hear of the plans being made for them by negotiators purporting to be trying to advance their interests.

Two years ago, a leaked “position paper” handed by PA negotiators to their Israeli counterparts offered to drop the core claim of Palestinians since their 1948 expulsion – the “right of return” – in exchange for an unspecified timetable for agreement on a “two-state solution.”

Palestinian president Mahmoud Abbas has assured a delegation from the “secular Zionist” Meretz Party that Palestinians would not ask to return to Jaffa, Acre or Safad. (The family homes of a third of the 1948 refugees are in Safad.)

Against this background, it is scarcely to be wondered at that, for the first time, some in the Lebanon camps have come to see the IS pitch – that Palestinians can never be free until they abandon the notion of a state of their own and fight instead for the caliphate – as increasingly plausible. IS remains far from a major force among Palestinians. But it is present, and now making its presence felt.

It’s not ideology alone which might prove a draw for Palestinians.

Franklin Lamb, formerly professor of law at the American University of Beirut, now a pro-Palestinian activist, wrote last week after “touring” the camps in Lebanon, that “IS is making it plain to all who will listen that they reject the ‘sell-out position’, and promises that under the caliphate every Palestinian on this planet has the inalienable right of Full Return.”

Then there’s the offer from the cash-flush killers of $300 a month, two days off a week for family visits, a payment of $400 upon the birth of a child and other side benefits. (The monthly UN food payment to refugees stands at $30.)

As Lamb comments: “One can imagine what some of the camp residents are thinking: which horse is the better bet for an improved life and for full return to your own country?”

One can also imagine the likely result if the extreme fundamentalist fervour of IS comes to mesh with the desperation of Palestinians.

Palestine is at the heart of the problem. There can be no peace in the region until the Palestinians have justice.