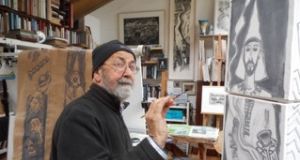 The Ballydehob Museum of Treasures – Artists, Bohemians and Craftspeople of an Iconic Era will open next year in the village’s former bank. This fine solid building was bought by the local community in 2013, painted day-glo green, purple and fuchsia-pink, and one part is open as a tourist office.

The rest will house the museum. This will celebrate the many artists, craft makers and writers who have lived and worked in west Cork – from Kinsale to Skibbereen, Bantry and Allihies – since the 1960s. Already the photographer Kevin O’Farrell has donated his archive to the project, and artist Brian Lalor has given his collection of local ceramics and art. The Community Council’s arts sub-committee is typical of the village’s population today. Its chairman, Eugene McSweeney, a Kerryman, is retired from teaching at Schull Community College, and has a special interest in local history. Cork city-born Brian Lalor has lived here on and off since 1973, and Robert Harris is an English architect who moved here with his Irish wife a few years ago.

We met for coffee in Budd’s, a thriving café serving local artisan food. At 11am in late March it was buzzing. There are six other places to eat in the village, seven pubs, and a petrol station with convenience store. There is a lively music scene at weekends, and 11 annual festivals.

For any rural Irish village today, let alone one with a population of around 300, this is a remarkable level of activity.

It is strange, even eerie to find your friends becoming part of history, and featuring in a museum

Ballydehob always surprises the traveller, its brightly painted houses straggling up a steep hill, behind a 12-arched railway bridge, apparently in the middle of nowhere. In fact, the water below the viaduct is a sea inlet, and the village grew up because it was the traditional trading place for the islanders of Roaring Water Bay. It has 12 official fair days, two of them dating from 1620. Copper has been mined here since the Bronze Age, and barites since the 1840s, when the population of these hills swelled to nearly 20,000.

By the mid-20th century the mines had closed, and the population had fallen to the low hundreds.

It was then that artists discovered the area, drawn by cheap property prices and the rugged scenery. There was also a minor influx from northern Europe, when Cork was identified as a safe refuge from nuclear fallout, but those investors did not settle.

The German sculptor Christa Reichel moved here with her Irish husband in 1964. When he left, she stayed on, encouraged by Julia and Nell of Levis’ Corner House, shopkeepers and publicans, who, like most locals, gave a warm welcome to “strangers”. Christa met Nora Golden in London, a batik artist, who shared her interest in Celtic motifs, and her love of the local landscape. Together they bought the village’s former hardware shop, renamed it the Flower House, painted murals on its facade, and set up a pottery, running it as a communal space for artists.

This attracted art students, including Brian Lalor, the late John Verling, and ceramicists Pat Connor, Etain Hickey and Jim Turner, who are still in west Cork. The poet John Montague bought a cottage nearby, and Eric Haugaard (translator of Hans Christian Andersen), restored a house on the pier. Francis Humphrys, now the director of West Cork Music, bought a farm up the road, where his nearest neighbour was cheesemaker (Durrus) Jeffa Gill.

It is strange, even eerie to find your friends becoming part of history, and featuring in a museum, but tempus fugit, and their achievements certainly deserve celebrating.

I spent the winter of 1982 attempting to write in a cold damp house in Ballydehob. In spite of the beautiful mountain view that made my heart flip every morning, I quickly decided that Ballydehob was not for me.

Julia and Nell used to put peeled slices of turnip on the bar counter at Sunday lunchtime, to provide us struggling artists with vitamin C

After three days I headed to Skibbereen with a shopping list that began “hot water bottle, alarm clock”, the latter needed due to late nights in Gabe’s Pub, the only warm place in the village.

I did get a novel out of Ballydehob (The Out-Haul, Hamish Hamilton, London, 1985), but when I moved to Ireland permanently, it was to my mother’s home town, (relatively) sunny Kinsale, not mountainy Ballydehob.

Julia and Nell used to put peeled slices of turnip on the bar counter at Sunday lunchtime, to provide us struggling artists with vitamin C. But they also gave practical help by buying artists’ work, and the pub (now run by their great-nephew Joe), has long served as an informal museum.

But now there is to be a proper one. The arts sub-committee is hoping that people’s attics may contain batiks, weavings, ceramics, paintings or posters and other memorabilia which they would consider donating. Please contact Eugene MacSweeney ateugenemc10@gmail.com.