Executed for spying – An Irishman’s Diary on Timothy Quinlisk 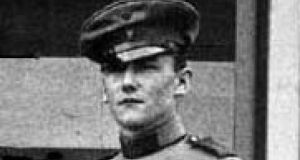 Timothy Quinlisk in his German Irish Brigade uniform. He was executed on the night of February 18th, 1920, the first civilian to be executed by the IRA in Cork for spying during the War of Independence.

Roger Casement’s visit to Limburg prisoner-of-war camp in late 1914 and early 1915 was an extraordinarily fruitless enterprise.

Casement’s task was ostensibly simple – get the Irishmen who served in the British army and were captured early in the war to turn tail and join the Germans in the vanguard of a liberation force to free Ireland from British rule.

Fanciful as it might seem in retrospect, the Germans were confident that the men could be persuaded to switch sides.

Their military attaché in Washington, Franz von Papen, a man who would go on to be German vice-chancellor under Adolf Hitler, reported back to Berlin, “Success and co-operation of all Irishmen in British army then beyond doubt. In northern France strong discord between Irish and English, therefore use of volunteer Irish prisoners against British again suggested.”

Casement visited the beaten, half-starved men who had been brought from the various camps and addressed them. He promised them liberation, good treatment, better food and better conditions.

He reminded them of the three civilians shot dead by British troops at Bachelors Walk in Dublin just a week before the war broke out. John Redmond was a traitor for suggesting Irishmen should go and fight for the British. Home rule was a “pretence” because the British could never be trusted.

Quinlisk was captured at the Battle of Le Pilly outside Lille, now the site of a memorial to the regiment’s men who were slaughtered there

More than 2,200 Irishmen were captured in the autumn of 1914. Casement is now regarded as a great Irishman, especially after his execution for treason in August 1916, but in late 1914 and early 1915, the Irish prisoners assembled at Limburg regarded him as a charlatan and a nuisance. They listened with mounting incredulity and no little irritation.

The Germans increased the pressure by allowing those few who signed up to his Irish Brigade to appear in front of cold and hungry prisoners wearing smart, German-made uniforms.

“They [the Germans] had them sitting there smoking cigars, and with wine, in good German uniforms, with food before them and enjoying themselves properly,” recalled one sergeant.

Neither the carrot nor the stick worked for Casement. The senior Irish non-commissioned officers (NCOs) sent a blunt message to the camp commandant that no attempt to bully them into joining an Irish Brigade would succeed.

“In addition to being Irish Catholics, we have the honour to be British soldiers,” they declared.

Fr Thomas Crotty from Kilkenny reminded the men that they swore an oath under God to serve the king and it superseded any temptation they might have to switch sides.

As a consequence, Casement managed to bag just 55 former British soldiers for his fancifully named Irish Brigade. Their numbers would barely make up a platoon let alone a brigade.

One of those who did join up though was Timothy Quinlisk from Co Wexford and the son of a RIC sergeant based in Waterford. He joined the 2nd battalion of the Royal Irish Regiment in May 1911 and witnessed his brother Michael being killed in the early stages of the first World War. “I was by his side as he breathed his last,” Timothy wrote to his father.

A few days after his brother’s death, Quinlisk was captured at the Battle of Le Pilly outside Lille, now the site of a memorial to the regiment’s men who were slaughtered there on October 19th and 20th, 1914. Quinlisk was one of the first to sign up to Casement’s brigade.

He expected others to join up, but they did not.

Instead, they taunted him as a turncoat.

Now, Mr Quinlisk, I know you well; your son John was shot here as a spy

When the Armistice was declared in November 1918, Quinlisk was working at a civilian job in Berlin. He made his way back to Ireland and was dismissed from the British army for misconduct. He tried to return to Germany, but the country was in the throes of a revolution and they weren’t interested in facilitating him.

He fell in with the republicans in the War of Independence. An ex-British soldier with contacts in the German military and proficiency in German was a potentially valuable addition to the IRA’s intelligence operations.

Quinlisk came with the promise of procuring guns for the IRA. Michael Collins was interested and put him on the payroll, but Quinlisk was quickly regarded as a liability, being both indiscreet and undisciplined.

When Collins cast him adrift, Quinlisk did another volte-face and offered his services to British intelligence in Dublin Castle. Quinlisk promised to deliver the most wanted man in Ireland to the authorities for which there would be an award of £10,000, enough for him to disappear in comfort for the rest of his life.

Money was not the only motivation. Quinlisk accused Collins of treating him “scurvily”.

Unfortunately for Quinlisk, Collins had his spies in Dublin Castle. Collins’s men set a trap for him. They let Quinlisk know that Collins was staying in a certain hotel in Cork. When the police raided the hotel, the IRA knew they had a spy within their ranks.

Quinlisk was executed on the night of February 18th, 1920, the first civilian to be executed by the IRA in Cork for spying during the War of Independence. He was riddled with bullets and his body lay in the Cork city morgue for days without anybody claiming it.

Eventually his father did. He confronted Mick Murphy, the man who he suspected of shooting Quinlisk.

Murphy was less than generous in his response to a bereaved father. He recalled years later: “I said to him: ‘Now, Mr Quinlisk, I know you well; your son John [sic] was shot here as a spy, and you had better take him and yourself out of this town within twenty-four hours or you will meet with the same fate.’”