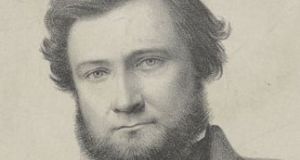 Peter Lalor, who came from Raheen in Co Laois, played a leading role in a rebellion that led to reforms in the way Australian workers were treated

In the bustling Flinder’s Street railway terminus in Melbourne, while waiting to catch a train to the port area where my ship was berthed, I got talking to two Irish fellows.

Among other things they told me they lived in a suburb called Lalor and that it was named after an Irishman who had played a leading role in a rebellion that led to reforms in the way workers were treated.

Only much later did I learn anything about Peter Lalor, who came from Raheen in Co Laois.

In Australia, his name is forever associated with the Eureka Stockade, a makeshift structure erected by the rebels in their revolt in the state of Victoria in 1854.

He was born into a large well-off family in Tinakill house. One of his brothers was James Fintan Lalor, of the Young Ireland movement and the unsuccessful uprising of 1848. Peter was educated at St Patrick’s College, Carlow, and then went to Trinity College Dublin to study for a degree in civil engineering.

He emigrated to Australia in 1852 and first worked on the construction of the railway line from Melbourne to the city of Geelong.

However, Lalor joined the tens of thousands of men flooding into areas of the country, particularly Victoria, where gold grains and nuggets had been discovered almost at ground level.

The Australian Gold Rush, as it was called, attracted multitudes of eager prospectors from other parts of Australia, as well as immigrants from Britain and Ireland. The promise of getting rich drew thousands of hopeful miners from the United States, Germany, Poland and China.

Vast stretches of the landscape became dotted with the tents and ramshackle huts of what were called “the diggers”. Many had left stable jobs to seek their fortune. Some brought wives with them who performed heroic deeds in creating households under the most trying conditions.

The diggers were sturdy individuals, toughened by the manual labour.They used their shovels in the open air in all weathers, wearing what were called cabbage-tree hats to protected them from the hot sun, neckerchiefs to absorb sweat and moleskin or canvas trousers to withstand the wear and tear of heavy labour.

Although Peter Lalor came from a relatively genteel background, he adapted to the harsh conditions and became as one with those around him.

At that time Australia was under British colonial administration. Its governors were invariably imbued with the prejudices of the ruling classes in Britain. Manual workers such as the diggers were to be kept in their place, controlled by strict policing, backed up by troops.

Licences were required by those laying claims and prospecting on patches of ground. Many diggers, barely surviving, were unable to afford them. Some refused to apply for them. The authorities then sent out police to hunt them down, and in some cases put them under arrest.

As a result the miners set up a Reform League. It demanded a better licensing system, full representation, voting rights and the alleviation of other grievances.

In November 1854, a meeting of some 12,000 men was held in Ballarat. One of the speakers was Peter Lalor, who spoke eloquently about the justice of their cause.

Over several fraught days some of the diggers became more militant. On December 3rd, with Lalor as their leader, in an armed uprising they erected a barricade of timbers and overturned carts in a place called Eureka.

The stockade was no barrier to the onslaught and fire-power of the Crown forces. A total of 22 rebels were killed and many more injured and the rest captured. They searched for Lalor. He lay injured but unseen under rubble and eventually escaped. However, his left arm had to be amputated to save his life.

The rebels were put on trial in Melbourne. This aroused such a mass public outcry that they were all released. A general amnesty was proclaimed and Lalor no longer had a price on his head.

Reforms were introduced that met the miners’ demands about licensing and representation.

It was a victory of democracy over authoritarian rule. It was the start of a process over the following decades where the rights of workers were defined and protected.

The Eureka Stockade incident and the graphic impression made by the diggers helped to define the way Australians saw themselves – strong, proud, independent-minded people who didn’t take easily to being bossed about and who were quick to support one another in times of need. It also began a growing opposition to being governed as a British colony.

Peter Lalor didn’t strike gold but his stature and fame led him to being elected to the legislative assembly of Victoria. He had a distinguished political career that culminated in his election as Speaker.

A statue of him in wig and gown stands in Ballarat. He became more conservative in his views as he aged and disappointed many of his radical colleagues. Yet in Australian history he is remembered as the man who led the rebels at the Eureka Stockade and lost an arm in doing so.