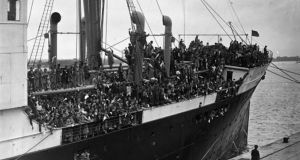 Some 3,840 Basque children evacuated to Britain aboard the ‘Habana’ after the aerial bombing of Guernica on April 26th, 1937

The decision of the government in November 2016 to admit 200 child refugees into Ireland after the closure of the “Jungle” Calais refugee camp was warmly welcomed across the political spectrum.

Yet Ireland has not always been welcoming to child refugees.

A notable example is in reactions to the fate of Basque child refugees fleeing Gen Franco’s bombers after the attack on Guernica during the Spanish civil war.

This month marks the 80th anniversary of the attack on April 26th, 1937, by the German Condor Legion and was the first large-scale air raid in history. Estimates vary, but up to 2,000 civilians were killed in a town that was not a military target. The objective could only have been to destroy the centre of the Basque people who supported the Spanish Republic.

After the attack, the British government, albeit reluctantly, allowed 4,000 Basque children entry into the United Kingdom.

No public monies were to be used in their care, only charitable donations.

This generated debate and opposition in the Irish press.

There were several reasons why, from an Irish perspective, the children should be repatriated to Spain.

The fear of proselytism for the Basque children loomed large. For the Cross, the very idea of Catholic children receiving respite in Britain was abhorrent. “Cromwell ‘expatriated’ hundreds of Irish boys and girls to the Barbadoes [sic]; not so many years ago the ‘soupers’ were engaged in the similar congenial occupation of perverting the souls of their innocent victims. Have the children of Bilbao fallen into the hands of friends or foes?”

The humanitarian gesture offered to the children of the Basque country was lost amongst the anti-British rhetoric. The Cross was not alone in this.

The Lourdes Messenger felt the whole episode was a propaganda stunt aimed at undermining Franco because the children were “healthy, well-fed and contented children, far less deserving of sympathy than thousands of their little brothers and sisters who languish in English slums. So the British conscience went untouched. And with the fall of Bilbao, it became quite disinterested.”

Appeals for the children to be repatriated were published by the “Patriot newspaper”. The needless “deportation” of the Basque children against their will to a non-Catholic state persisted in the Independent until the latter stages of the conflict.

A report by the Press Association was published by the Independent on September 1st, 1937.

The writing was unremarkable, except for a subtle piece of subediting. The article was neutral and documented the expected departure of Basque children back to Spain after the delivery of letters from the families until the last paragraph: “Owing to the non-recognition of General Franco, representations to the British Government have been impossible, and everything had to be carried on unofficially. Patriot newspapers are carrying on a ceaseless campaign for the return of the children.”

The Irish Times was the exception in seeing some humanity in the British acceptance of the child refugees from Spain. The paper likened the playfulness of Irish children to the plight of the Basque children whose innocence was taken away.

An article focused on the attacks the children had witnessed who “had seen their parents and their brothers and sisters hurled to death”. Finally, there came a warning to Europe. The danger of aerial bombardment was the new reality in a Europe that was heading for another world war and “the fear of these Basque children, even in the sheltered English encampment, should go a long way towards the awakening of a new humanity in Europe”.

As we bear witness to the worst migration crisis since the second World War, we do not have to delve too deeply into Ireland’s history to find an event when we were not so readily willing to accept child refugees.

William Burton is a PhD student at Ulster University

1 Coronavirus: One more death in Republic as expert warns house parties are ‘disaster’ for containment
2 Róisín Ingle: Even Matt Damon has fecked off back home
3 Populist politics in all but name is alive and well in Ireland
4 FaceTiming Pamela Anderson: Nothing can prepare you for this
5 George Floyd death: Man shot and killed by law enforcement in Kentucky
Real news has value SUBSCRIBE