Was ever a generation so misled?

Emotional scenes and many tearful mammies at Dublin Airport as thousands of Irish people returned home for the Christmas holidays. Video: Bryan O'Brien 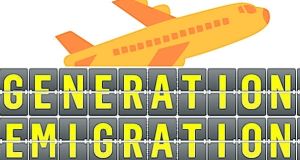 “In some ways they’re like passengers who have walked away from a car crash, the awful shock buffered by the joy of survival. The sad thing, of course, is that so many of them have indeed walked way”

Like so many Irish parents of advancing years, I have the bittersweet joy this week of grown-up children coming home for Christmas. It’s a time to embrace them, of course, but maybe it’s also a time to acknowledge how remarkable they are, that whole generation: the poor banished children of the Fall, the golden kids of a golden Ireland who grew up in our little Eden and were then rudely turfed out into a cold world. Let us salute their resilience and celebrate the astonishing fact that most of them are not stark staring mad.

In May 2007, my late and much missed colleague Seán Flynn reported on the first Irish Times graduate survey of students in their final year. It makes blackly comic reading: “Final-year students in our seven universities are hugely optimistic about the future. Most believe they will own property by the time they are 30. Many expect to purchase a buy-to-let investment property within the same timeframe . . . And they are optimistic that the jobs will fall into their lap . . . By the time they are 30, most envisage a comfortable settled life with plenty of money and a dizzying array of travel and lifestyle options.”

And they are 30 now. They’ve probably copped that “a dizzying array of travel and lifestyle options” meant “feck off to Australia or, alternatively, feck off to Canada”. The “comfortable settled life”, if it happens for many of them, will happen in Ireland’s 33rd and most attractive county – Co Elsewhere.

What did we do?

Dear God, what did we do to them? Individually, we were lovely middle-class parents who gave our darlings everything, but collectively, we should be on one of those Jerry Springer or Jeremy Kyle freak shows: “My husband had sex with a gerbil!”; “My parents told me I’d have buy-to-let investments by now!”

You can see what was in their heads: they were going to be living in nice houses or cool apartments in Ireland, driving fancy cars, leaving the island only for executive business trips or exotic holidays in the ample vacation time their lovely employers would give them. Poignantly, a lot of them expected to be married and have children by now. It mostly didn’t happen – the average age at marriage has risen sharply during the crisis years and is now 35 for Irish men and 33 for Irish women. And of course most of the rest of it didn’t happen either. Maybe a few of them are on their €100,000 salaries now, but a lot more have been in unpaid internships or insecure jobs that don’t match their education and aspirations.

Instead of the famous soft landing, they got an awful land – pun intended. And I don’t want to minimise the pain of this disorientating plunge from the battlements of the imaginary castles we built for them in the misty Irish air. There has been a fearsome toll in depression, dislocation and drift. But in fact most of this generation has coped remarkably well. The rug was pulled from under them but they gradually found their feet. They may feel bitter about Ireland but you don’t meet a lot of personal bitterness in them. They’re tough and decent and funny and tender towards each other. They’re not demented.

In some ways they’re like passengers who have walked away from a car crash, the awful shock buffered by the joy of survival. The sad thing, of course, is that so many of them have indeed walked way. If we’re ever to entice them back, it won’t be with a return to grand delusions. The one thing we’ve done for them is to inoculate them against that particular disease.

1 Man (23) doused in petrol and set on fire in Cork attack
2 Why has the pension age question suddenly become an election issue?
3 Dr Eva’s Great Escape is everything Dermot Bannon’s recent show was not
4 Ireland has fifth-largest number of billionaires per capita in the world, says Oxfam
5 Ken Early: Solskjaer’s short-term gambles proving very costly for United
Real news has value SUBSCRIBE