The Irish Times view on the Westminster fiasco: May plays her final card 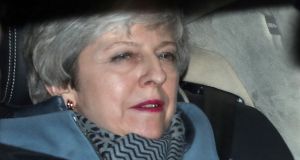 Having made the ultimate political sacrifice, then, May could well still fall short. That would be an apt final act to her ill-starred premiership. Photograph: Daniel Leal-Olivas/AFP/Getty Images

Theresa May has played her final card. Having twice failed to win parliamentary approval for the withdrawal agreement she negotiated with the European Union, and with the clock ticking towards the latest Brexit deadline, she offered her Conservative Party colleagues a bargain: support the deal in exchange for my resignation. Or, the unstated version: back the deal or be stuck with me for the foreseeable future. May was counting on the cynicism of her colleagues – that the hard Brexiteers’ desire to be rid of her was greater than their objections to the backstop. Her assumption was largely correct.

The most prominent members of the Brexiteer faction swiftly indicated they would abandon their supposedly unshakeable opposition to the backstop if it helped hasten May’s departure. Others followed. What May didn’t count on was one of the immutable laws of Irish politics: when the DUP says No, it usually means No. For the unionist party led by Arlene Foster, Brexit is a subsidiary concern. Its real problem is that it long ago backed itself into a corner on the backstop, wrongly portraying it as a terminal threat to the union.

The DUP could yet fold but if not its opposition, combined with that of some holdout Brexiteer ultras, could finish off the deal.

Six weeks ago, that would have been a bigger calamity, leaving a no-deal exit as the most likely alternative. But with the remain-majority House of Commons having taken control of the process, the prospect of a chaotic no-deal, while still possible, has receded somewhat. A series of indicative votes on Wednesday showed there was no majority for any alternative option, but they also underlined that some version of a soft Brexit has the clearest path to a majority.

Having made the ultimate political sacrifice, then, May could well still fall short. That would be an apt final act to her ill-starred premiership. When the history of the Brexit debacle is written, blame, no doubt, will be widely apportioned. But May has been a singularly inadequate leader at a time of crisis. It was she who allowed Brexit to be defined in the hardest possible terms. It was she who activated article 50 without knowing what she wanted, let alone how she would get it. It was she who set down red lines that locked London into a deal that her party opposed. And it was she who, instead of reaching across the aisle and seeking a way forward in the British national interest, consistently put her own party first.

When flexibility was required, she was stubborn. When creativity was called for, she was dogmatic. And when the hardliners had to be faced down, she retreated. Theresa May’s downfall is tragic only in the classical sense; she has indeed been brought down by a combination of her own failings and circumstances she cannot handle. But the greater tragedy is the state of the country she will leave behind.