The Irish Times view on protests in Hungary: Standing up to Orbán

Ultimately, the most important challenge to the illiberal regime must come from the people 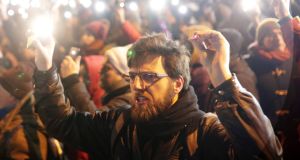 People hold up their mobile phones as they attend a protest against a proposed new labour law, branded the “slave law”, outside the headquarters of the Hungarian state television in Budapest on Monday. Photograph: Marko Djurica/Reuters

Around 10,000 Hungarians braved the December cold in Budapest on Monday night for a new round of protests against prime minister Viktor Orbán’s creeping authoritarianism. The immediate focus of the demonstrators’ anger is new legislation that increases from 250 to 400 hours the amount of annual overtime that employers can demand from staff. Critics call it the “slave law”.

But the public discontent stems from a much broader campaign by Orbán’s illiberal regime to tighten social controls and quell dissent. Just last week, the government passed a law to set up new administrative courts that will answer to politicians and oversee sensitive issues such as electoral law, protests and corruption.

The rally on Monday took place outside the headquarters of the state broadcaster, accused of pushing Orbán’s nationalist propaganda and silencing opposition voices.

The government has tried to brush off the protests. A spokesman for Fidesz, Orbán’s party, dismissed the protesters as pawns of “the pro-immigration Soros network”, referring to the Jewish-American businessman who has become a familiar target of Orbán’s demogoguery.

The authoritarian drift in Hungary poses a real challenge for the European Union, which has struggled to find an agreed response to a problem the union’s founding charters did too little to anticipate. The EU is taking legal action over Orbán’s policies on migration, NGOs and education, but the prime minister continues to press ahead with reforms that undermine the country’s democracy and rule of law. At some point, a serious clash is inevitable, testing just how serious the EU is about enforcing breaches of its fundamental values.

Ultimately, however, the most important challenge to Orbán must come from his own people. That’s why the peaceful protests taking place in Budapest are an encouraging sign, suggesting that civil society will stand up against the most egregious policies of a reactionary government. The rest of Europe should support them.