Minister for Agriculture Barry Cowen has told the Dáil he is "profoundly sorry" for a drink-driving offence in 2016. Video: Oireachtas TV 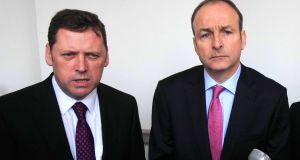 Micheál Martin has got off to a rocky start in his new role as Taoiseach with rows over the appointment of Fianna Fáil Ministers followed swiftly by an embarrassing disclosure that raises questions about the standards we should expect of our public representatives.

The revelation that new Minister for Agriculture Barry Cowen was guilty of a drink-driving offence four years ago and had failed to divulge it to the Taoiseach presented an immediate test of his authority. Martin was unaware of the incident and chose to accept his Minister’s apology for the sins of commission and omission.

Martin’s tolerant approach was probably due, in part at least, to the fact that Cowen’s drink-driving offence was at the lower end of the scale and he would not have been over the limit if he had been the possessor of a full driving licence. He was disqualified from driving for three months because he was a provisional licence holder to which a lower limit applies. But driving on such a licence raised its own questions and, when making a formal apology in the Dáil on Tuesday, Cowen acknowledged it as bad practice which he should have regularised much sooner.

These events placed Martin in a difficult position. After the initial controversy over his ministerial appointments, a decision to take action against a senior Minister would have created a greater sense of disarray within Fianna Fáil. But leaving Cowen in his post has led to another serious problem. It tends to confirm the impression, at a time when Sinn Féin’s Michelle O’Neill is under scrutiny for her approach to pandemic rules while attending the funeral of Bobby Storey, that there is one standard for politicians and another for ordinary citizens. Given that our TDs are responsible for making the laws, they should face political repercussions when they break them.

The Cowen episode was followed by further public disquiet over the behaviour of Fianna Fáil MEP Billy Kelleher who travelled to Dublin to celebrate the election of his leader as Taoiseach having returned from European Parliament business in Brussels. This is not a simple issue as MEPs cannot do their job if they are obliged to follow the 14-day quarantine rules every time they travel to and from Brussels. But being present for his leader’s big day was foolish of Kelleher who should have followed the example of Martin’s family and had the good sense to stay in Cork.

The hard lesson for the Taoiseach and his Fianna Fáil colleagues is that being in government is very different to being in Opposition. Every decision and every action – past and present – will be scrutinised and criticised in a way the party TDs have not been used to for the past decade. If they do not adjust quickly to the standards required, further embarrassing and destabilising episodes will be inevitable.