Ireland correct to stand with UK 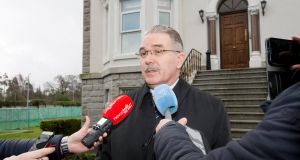 Taoiseach Leo Varadkar was right to express solidarity with the United Kingdom in the face of the recent chemical weapons attack which almost certainly originated from Russia. The unambiguous support for the stand taken by the British government in response to the outrageous attack launched on their territory was the least a good neighbour should do in the circumstances.

The question for the Government in Dublin now is whether to go beyond verbal support and expel some of the personnel based at the Russian embassy in Dublin. The Government should not allow itself to be intimidated by the threat from Russian ambassador to Ireland, Yury Filatov, that any expulsion of diplomats from Ireland would be treated as an “unfriendly action”.

At the European Council meeting in Brussels the leaders of the EU member states adopted a statement declaring it was “highly likely Russia is responsible” for the attempted poisoning of former Russian double agent Sergei Skripal and his daughter Yulia in Salisbury earlier this month.

The Irish authorities should now make a judgment based on a security assessment of the Russian embassy in Dublin as well as the political considerations required by EU solidarity.

The Taoiseach said in Brussels that it was he and French president Emmanuel Macron who had proposed to the other EU leaders that they go further than their previous position of expressing concern and agree that Russia was likely to have been responsible for the attack in the UK.

The declaration went considerably further than the statement by EU foreign ministers earlier this week which avoided assigning blame to Russia. In a further sign of unity, the EU decided to recall its ambassador from Moscow to consult with the commission over the attack in Salisbury.

A potentially beneficial side effect of the alarming stand-off with Russia is that the solidarity with the UK shown by almost all of the EU states may have the effect of improving the atmosphere for the talks on Brexit. On that issue the Taoiseach maintained that the UK had reaffirmed the promise made in the phase-one agreement in December to implement a backstop to ensure that Northern Ireland would effectively retain EU economic rules, if no other route emerges to avoid a hard border on the island of Ireland. While there is certainly an element of pushing the potential for conflict down the road, there was little to be gained by trying to making the Irish Border issue a stumbling block to the start of serious trade negotiations.

It is important for this country that the talks did not degenerate into a conflict with the UK over the Border as both countries have a common interest in having the most seamless possible trade deal between the EU and the UK as the eventual outcome.