Iran protests: A regime under threat 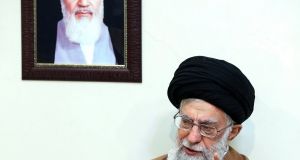 Iranian Supreme leader Ayatollah Ali Khamenei, sitting under a portrait of the late Iranian revolutionary founder Ayatollah Khomeini, as he speaks during a meeting with family members of Iranian martyrs, in Tehran yesterday. Photograph: EPA

The widespread protest movement in Iran over the last six days raises fundamental questions about the structure of power and on whether reformists or hardliners there will retain the political initiative in response. Economic and political slogans intermingle in the demands made by the demonstrators - mainly younger people from the poorer cities, towns and neighbourhoods of this country of 80 million people. They have lost patience with a regime dominated by unaccountable and heavily subsidised clerical and military elites who remain impervious to recent budget cuts imposed on the rest of the population. And they resent Iran’s expensive foreign policy activism in the Middle East.

Popular expectations of social and economic improvement followed the 2015 international agreement on the country’s nuclear programme and victory in May’s presidential elections by the reformist candidate Hassan Rouhani. His pledges to combat extensive corruption, reduce inflation and galvanise economic development, investment and employment have been disappointingly slow to materialise. Struggles with hardline opponents, a series of corruption and financial scandals and recent extensive cuts in monthly food and fuel subsidies brought tens of thousands onto the streets to protest. Despite censorship of mainstream newspapers and broadcasters, social activists organised themselves through online media, even though there is little evidence of coordinated national leadership.

Iran’s supreme religious leader Ali Khamenei yesterday blamed the protests on foreign powers and opponents. Saudi Arabia, Israel and the United States loom large in his demonology and have indeed been much more active in opposing Iran’s involvement in Iraq, Syria, Lebanon and Yemen over recent months. His constitutional and political powers give him control of foreign and military policies as well as a huge religious establishment. This base runs much of the economy and military forces, including the Islamic Revolutionary Guards Corps. Revelations of the huge subsidies extended to them contrasted with the budget cuts for poorer people have driven the protests. The failure to protect living standards at home raises questions about Iran’s ambitious involvement in the wider region.

This theocratic power structure pits many vested interests against President Rouhani’s reform programme. The protest movement and how to respond to it will divide them even further, as fears for the regime’s stability multiply. Already the numbers of deaths indicate mote bitter confrontations between protesters and security authorities. They are likely to intensify in an effort to head off and quell the protests in coming days.

Where that repression and rivalry leave Iran’s leaders and citizens is a major question for the future of its politics and international position. Previous rounds of protest in 2009 and the 1979 revolution were more extensive and deep-rooted than this. But in a few days the large gaps between rhetoric and reality have been exposed. Seventy per cent of Iran’s population is under 35 and they are demanding their interests become more central to its public affairs.