‘Baptism barrier’: a step in the right direction 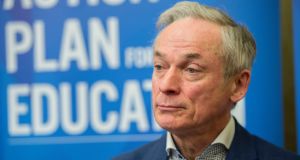 Minister for Education Richard Bruton’s plans for removing the “Baptism barrier” have drawn criticism from Catholic groups who fear they will lose out under the measure. Photograph: Brenda Fitzsimons/ The Irish Times

The Minister for Education’s plans to remove the “Baptism barrier” for entry to most primary schools have drawn sharp criticism from Catholic groups. If implemented, Catholic primary schools will be prohibited from giving priority places to baptised children in cases where they are oversubscribed. However, minority-faith schools will be permitted to give preference to members of their own religion in order to protect their ethos.

Catholic groups dispute the scale of the problem of children being turned away from schools on religious grounds and claim just over 1 per cent have been refused paces on this basis. Yet, they also warn that such a move has the potential to destroy faith schools and their capacity to give vitality to their characteristic spirit. There is a contradiction at the heart of this argument.

Our education system is increasingly out of step with a changing society. More than 95 per cent of primary schools and almost half of secondary schools remain in the hands of religions denominations. Yet, up to 20 per cent of children today are of no religion, while more than a third of marriages are not religious.

While religious schools have a right to express their characteristic spirit, these publicly-funded institutions should not be entitled to exclude children on the basis of religion in their admission policies. While many schools are flexible and inclusive, there are plenty of examples where this is not the case.

It is unfair that non-religious families who live close to their local publicly-funded school find that preference is given to religious children who live some distance away. It is also unfair that parents, who might otherwise not do so, feel pressure to baptise their children to help gain access to their local school.

Richard Bruton’s plans are a proportionate response. They will introduce fairer admission policies. More radical reform is needed to ensure our schools reflect the reality of modern society. For now, the move to remove the “Baptism barrier” is a step in the right direction.