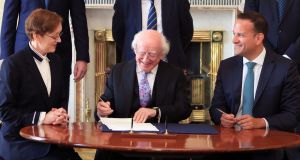 Máire Whelan, President Michael D Higgins and Taoiseach Leo Varadkar at Áras an Uachtaráin on Monday during the signing of the warrant appointing Ms Whelan to the Court of Appeal. Photograph: Colin Keegan/Collins

Karl Marx said history repeats itself the first time as tragedy and the second time as farce.

The most recent Irish instance of this principle is that in 1994, the outgoing attorney-general, Harry Whelehan was appointed as president of the High Court in controversial circumstances; whereas this week his near namesake, Máire Whelan, also a former attorney-general, was appointed to the Court of Appeal, in a another dense cloud of controversy.

Over the protest of the Labour ministers in 1994, the attorney-general of the day, a controversial figure in various ways, was appointed to the vacancy as president of the High Court.

This had severe consequences. First, the Labour Party joined the opposition in voting no confidence in Albert Reynolds’s government, which, as a result, fell. It was replaced, with no intervening election, the only time this has happened, by a rainbow coalition.

Secondly, in reaction to this blatant piece of stroke play, to prevent any repetition, the incoming government set up the Judicial Appointments Advisory Board (JAAB).

The only State actors who come out of the present imbroglio with any credit are the Government’s spin doctors. At the start of the controversy, news commentators followed slavishly the line, obviously fed to them by Government information officers, that Ms Whelan was “the wisest lawyer since at least Cicero, Solon or Hammurabi” and that this appointment was within “the Government’s prerogative” (beware the “sixpenny words”). It is a convention that the attorney-general of the day must have first refusal of any judicial positions that fall vacant on their watch.

Turning to the second of these points, certainly in 1994, Reynolds made the firmament ring with the proposition that there was a convention that the attorney-general should have the choice of any vacancies that fell vacant during his term. The evidence on this was set out in an article, by Harry Mc Gee in yesterday’s Irish Times. The gist of it was that such appointments happened quite a lot before 1994. But afterwards, there was a substantial change, with many former attorneys-general, whose appointments would have added lustre to any court in the world, for whatever reason not applying for judicial vacancies.

As to the fact that there was only one name before the Cabinet meeting because, it was claimed, that is the usual practice, I have two comments. First,the Constitution is clear enough that, while the President appoints the judge, it is the Government, not just the Minister for Justice or the attorney-general, which behind the scenes advises the President.

Second, even if giving one name only to the Government is generally good practice, circumstances alter cases. And, here the unique circumstances include the candidacy of the attorney-general; the omission of the JAAB stages; and the fact that three judges had thrown their hats in the ring.

Many State institutions have been undermined by this sorry episode. The damage to the Government is obvious. Even if the public’s memory of facts is naturally short term, impressions linger.

Next, the limitations of the JAAB have been cruelly exposed. Its inertia in the face of the rumours that must be have been reverberating around the small pool in which the choicest fishes of legal – and political – Dublin swim is not impressive.

More importantly, a future point concerns its successor, the commission proposed in the legislation to be enacted in the autumn and championed by Minister for Transport and Independent Alliance leader Shane Ross (who seems to have been treated rather unfairly in the media, considering all the circumstances).

Two features of the proposed commission are, in my opinion and that of others, undesirable. The first is that it will have a lay majority. The second is that the Chief Justice will not be the chairperson. Any opposition to these features is likely to be undermined by a kind of public gut reaction against the JAAB which jumps to the conclusion that everything about the board must be changed in the new commission, including bringing in a lay majority and lay chairman.

Most important of all is the impact on the respect which the public will have for the judiciary. Older readers may recall that following the appointment of Whelehan, during the four-day period before he took the honourable course and resigned, some cautious barristers declined to go to his court because they were afraid that any judgments given by him would not be regarded as lawful.

The principle that a person may not “be a judge in their own case” (to translate from the Latin) is a central one throughout the world, not least in the Constitution.

Dozens of cases engaging this principle come before the High Court each year. One wonders at Ms Justice Whelan’s likely reaction if she is asked to adjudicate on such a case. Will she recuse herself from the case, on the ground that she considers it a silly idea anyway?

Pace Marx, there is nothing humorous about this sorry episode.

David Gwynn Morgan is emeritus professor of law at UCC