Eamonn McCann: US should apologise to Cuba, not the other way around 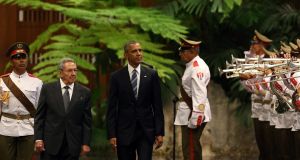 Obama didn’t touch down in Havana with an apology in his pocket for the US having first slathered Cuba in sleaze, organised an invasion by far-right desperadoes, made at least five attempts on Fidel Castro’s life, imposed a blockade in an effort to impoverish the country into submission and erected an internment camp on its soil where perceived enemies of the US could be tortured, some to death. Alejandro Ernesto/EPA.

I wonder did President Obama put in a good word for the Lanskys during his visit to Cuba. The family wants its hotel back. Says spokesman Gary Rapoport: “It was through my grandfather’s hard work that the hotel was built. By rights it should be our property.”

The Hotel Riviera epitomised the glamour of an era long gone. Its casino was among the hottest of Havana hotspots, its guest list a roll call of the celebrities of the age – Marlon Brando, Ava Gardner, Marlene Dietrich, Gary Cooper, Errol Flynn, Buster Keaton and Rocky Marciano, as well as figures such as Winston Churchill. The hotel was run by the Mob. Meyer Lansky was the Mob’s accountant. He had a mutually enriching relationship with dictator Fulgencio Batista, but was to lose everything when Batista bolted for the airport on New Year’s Day 1959 as Castro’s guerrillas exulted into the city.

Meyer was himself a celebrity gangster, represented in The Godfather II as Hyman Roth, bookkeeper and bagman for Vito Corleone. His grandson recalls: “Innocent people may have been killed now and then, but not like the crimes of today. That is why my grandfather’s era of crime is so popular. They were like gentlemen killers and they dressed nice.”

It’s arguable Meyer’s role in Cuba was no more damaging than that of the operators of mines, sugar plantations or refineries – Coca Cola, Exxon etc – respectable enterprises that had ridden roughshod over Cuban rights until Castro put a halt to their gallop and whose compensation claims are now among 7,000 submitted to the US government for negotiation as an element in the “normalisation” process.

It was in retaliation for the seizure of US property that the blockade of Cuba was first imposed. It was not a denial of human rights but of property rights that incurred Washington’s wrath.

The strength of the compensation lobby shouldn’t be underestimated. The nationalisation of US assets has been estimated in the Inter-American Law Review as the “largest uncompensated taking of American property by a foreign government in history”. Both Republican and Democratic members of Congress have deemed it an issue needing resolution before tentative détente can develop into friendly relations. The Lanskys won’t win the $70 million they say they are owed, but they’ll get something.

Obama didn’t touch down in Havana with an apology in his pocket for the US having first slathered Cuba in sleaze, organised an invasion by far-right desperadoes, made at least five attempts on Fidel Castro’s life, imposed a blockade in an effort to impoverish the country into submission and erected an internment camp on its soil where perceived enemies of the US could be tortured, some to death. A brief “Sorry about that,” might have been an appropriate opener. But no. Obama wanted to challenge Cuba’s human rights record instead.

Raul Castro got his retaliation in first, with a reminder that the human rights to healthcare and education are better realised in Cuba than across the straits in Florida. He might have added there is no prisoner on death row in Cuba, in contrast to the droves awaiting death in the privatised prison-cells of the US system. Or that, in contrast to the dismaying drift of events in the US, Cuba has one of the most liberal abortion laws and one of the lowest rates of infant mortality in the world.

He might have remarked that if Cuba were a satrap state in the Middle East rather than an island in the Caribbean, he could chop the heads off as many political opponents as he liked without Obama uttering a syllable of concern.

But there’s a balance of political morality to be made in the meantime, and the weight of morality is on Cuba’s side.

While we wait for an updated version of Meyer Lansky to saunter into his nostalgia-themed Havana casino, just one more time: Cuba si! Yanqui no!

1 How one couple’s weekend away resulted in 30 Covid-19 cases
2 Taoiseach tells TD to ‘cop on’ over criticism of contact tracers asking about pubs
3 Coronavirus: 429 new cases as vigilance urged amid rises across the country
4 Miriam Lord: Government’s latest comedy of errors offers little to laugh about
5 Pierce Brosnan’s Malibu mansion on the market for $100 million
Real news has value SUBSCRIBE