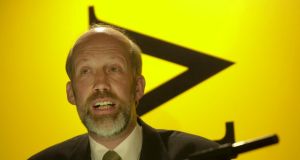 David Ford, NI Justice Minister: “I can only go on the evidence that I have...that it is possible to diagnose accurately fatal abnormalities of a foetus.” Photograph: Bryan O’Brien

Nobody has ever had a heart attack. The medical term is myocardial infarction. Nobody has ever died of a stroke. But many have succumbed to a cerebrovascular accident. Some of us can remember when scarlet fever was spoken of with dread. In fact, what our parents feared might strike us down was streptococcus pyogenes.

The words weren’t important. What mattered was that everybody knew what we were talking about. The same applies to “fatal foetal abnormality”. It has been pointed out in recent weeks this isn’t a recognised medical term. But we all know what it means.

Oh no, we don’t, insist “pro-life” campaigners. No doctor can say with certainty that a particular foetal abnormality will prove fatal, or when. Right again. As a letter in this newspaper on Monday pointed out, “72 per cent of babies diagnosed with anencephaly . . . live beyond birth, with 25 per cent living up to five days.” (The writer meant 72 per cent of anencephalic babies brought to full term.)

The point is regularly made too that many women who choose to carry on a pregnancy despite a diagnosis of anencephaly or similar dreadful condition and who are able then to cuddle the baby for hours or even days report this as a contented and fulfilling experience which they wouldn’t have missed for the world. They fervently believe they made the right decision.

Many women in the same circumstance who opt for a termination are just as content with their choice and never experience a twinge of regret.

It was logical, then, that individuals and organisations campaigning for the right to choose have been to the forefront in condemning the London government’s proposal as part of its austerity programme to withdraw state benefits from third and subsequent children. (The proposal would apply automatically to the North following the DUP/Sinn Féin decision to return welfare powers to Westminster.) The right to choose is obviously constrained when choosing to have another child could risk existing children going hungry. The Alliance for Choice group in the North put it plainly in a comment on “welfare reform”: “The right to choose has to mean the right to have a child as well as the right not to.”

The extent to which “pro-life” advocates play fast and loose with language was evident in the North earlier this year when Minister for Justice David Ford published a consultation paper on changing the law to allow abortion in cases where the foetus had no chance of survival. Then SDLP leader Dr Alasdair McDonnell would have none of it. The word “fatal” was entirely inappropriate, he reckoned. “Basically, the predictions in these circumstances are never accurate . . . Nobody can predict that a foetus is not viable and that’s the problem.”

Ford responded: “I can only go on the evidence that I have – for example from the Royal College of Midwives, the Royal College of General Practitioners, the department of foetal medicine at the Royal Victoria Hospital, the Royal College of Obstetricians and Gynaecologists and the British Medical Association. All these bodies make clear that it is possible to diagnose accurately fatal abnormalities of a foetus of the sort which is proposed in the consultation, which is that two doctors will certify that there is a fatal abnormality that is incompatible with life and that no treatment can be offered after delivery that will make the situation any better.”

Invited to ponder why Dr McDonnell should persist in maintaining his position in face of overwhelming evidence and the effectively unanimous view of medical experts, a senior Belfast-based consultant specialising in foetal medicine, Dr Samina Dornan, responded: “God only knows” – a more apt observation than might appear at first sight.

When a woman with an unwanted pregnancy considers the implication of carrying it to full term, considers the moral and practical arguments for this or that course, when she consults her own conscience and then makes her own choice, that should be the end of it. All else is dogmatism and waffle.

1 Life in Level 3: What will happen under new restrictions in Dublin?
2 Coronavirus: Dublin hospitals under ‘significant pressure’ as county set for Level 3
3 Stephen Donnelly dodges the questions as Matt Cooper mercilessly pursues the answers
4 Coronavirus: Indoor dining, weddings, funerals, travel to be hit as Dublin set for Level 3
5 Cluster among golfing group in Midlands a 'significant Covid-19 incident'
Real news has value SUBSCRIBE