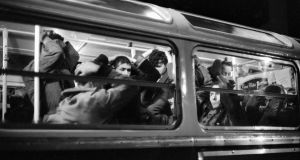 Algerian migrants in a bus after they were arrested by French police during a brutal police crackdown on October 17th 1961. Photograph: AFP/Getty Images/Archives

At the opening session of the talks which led to the latest Stormont House Agreement, Northern Secretary Theresa Villiers called for “a fresh approach” to the problem of dealing with the past. A truly fresh approach would be Villiers coming clean about the past actions of soldiers and others under British command. But that’s precisely the point on which discussion broke down.

Villiers suggested afterwards that the difficulty lay in a disproportionate concentration on “the activities of the state” compared with “the wrongdoing of paramilitaries”. Paramilitary crimes are “wrongdoing”, state atrocities are “activities.” Still, all parties were agreed that no overall deal would endure without a common understanding of the events that had brought us to this juncture. Let’s apply this perspective to November 13th in Paris.

Associated Press described the attacks as “the deadliest violence to strike France since the second World War”. Dozens of other western outlets echoed this view. But it is wide of the mark. The deadliest violence to strike France since 1945 was probably the mass killing of Algerians by the Paris police in 1961. “Probably” , because even today there’s no consensus on how many were done to death. Nobody was counting. Estimates vary from 80 to 300.

It might be thought such an event would be well-remembered and worth mentioning in the context of coverage of November 13th. But apparently not. It seems reasonable, however, to speculate that Parisian Muslims might be better acquainted than most with the events and with the complicity of successive French governments.

It would be crass to suggest a direct link between 1961 and the fact that a number of the Islamic State attackers – including the apparent leader of the Bataclan concert hall killers, Omar Ismaïl Mostefai – were French citizens of Algerian lineage. But neither can 1961 be discounted when it comes to a political explanation of the Paris massacre.

There’s a pattern here. Ask almost any Iranian you chance to meet what the significance is of the number 655, and they’ll tell you of Iran Air Flight 655, a civilian plane on a flight from Teheran to Dubai shot down by a guided missile fired from the cruiser USS Vincennes in July 1988. The plane was on its usual flight-path, over Iranian waters and in Iranian airspace when it was blown out of the sky with the loss of all 290 passengers and crew. Ask a westerner what 655 connotes and like as not you’ll be asked in return whether it doesn’t have something to do with devil-worship.

On April 3rd last, in Bir Mahli village in Aleppo in Syria, 19 women and 31 children were killed by “coalition” bombs. No one has apologised or volunteered responsibility. The names of the dead are entirely unknown in the countries that killed them. There were 2,449 western bomb attacks on Syrian targets in the year to August. The tempo is set to quicken in the aftermath of November 13th. The numbers fleeing the quadripartite (at least) battle for military supremacy will rise steeply.

It is when the despairing anger arising from these circumstances intersects with the promise of liberation held out by an apocalyptic version of Islam that the message of Islamic State, also known as Isis, begins to resonate across the region and beyond. The extirpation of Isis requires an end to these circumstances – or at least to be seen to be willing to try to end them. But that’s not in the perspective of any major player.

Western armies have been rampaging across the Middle East for a thousand years, never in the interests of the people of the region, always intent on robbing its riches while strengthening their own strategic position.

Villiers is right when she says all who genuinely want a solution to such intractable problems must deal with the past: logically, their own past first. But neither in the North nor anywhere else on which imperial Britain has left its mark does it show the slightest intention of doing any such thing.