Contradictions preventing a durable peace have been sharpened rather than resolved 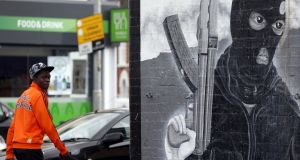 A paramilitary mural is seen on a wall in East Belfast in Northern Ireland. REUTERS/Cathal McNaughton

Another week, another crisis in the peace process which passeth all understanding. Tuesday’s report into the state of the Northern Ireland ceasefires was studded with absurdities. DUP leader Peter Robinson had cited “the involvement of the IRA in murder [and] the continued existence of IRA structures” as reasons for leading his Ministers out of the Executive. Now he learns that he hadn’t known the half of it. Not only did Provisional IRA structures continue to exist, but its army council exercised a supervisory role over the operation of the party he shared office with. The corporate policy of the PIRA was to guide the movement along a constitutional path towards a united Ireland, the report confirmed. But, “individual PIRA members remain involved in criminal activity . . . and there have been isolated incidents of violence, including murders.”

The immediate cause of the hiatus had been PSNI Chief Constable George Martin’s claim on August 22nd that members of the PIRA had been involved in killing Kevin McGuigan 10 days earlier. Robinson explained that, in light of this indictment, he could no longer stomach sitting in the Executive alongside Sinn Féin Ministers. Now he was being told that it was “murders”, plural.

We have been here before. In September 2008 Stormont went into crisis over the devolution of policing and justice. The May deadline for the transfer of powers had been missed. Robinson wouldn’t approve the handover without confirmation that the IRA had gone away. He explained he’d been told in a briefing by then PSNI chief constable Hugh Orde that some of the IRA’s structures, including the army council, did continue to exist but were “not involved in terrorist activity”. This wasn’t good enough.

“The structures must be removed completely. There is no purpose of having a structure if you do not intend to operate in a paramilitary fashion . . . We require the removal of the IRA’s army council and we’ve always made that clear.”

Secretary of State Shaun Woodward responded by asking the Independent Monitoring Commission for an up-to-date report on the PIRA. “We are aware of the questions posed about the public disbandment of PIRA’s leadership structures,” the report began. The organisation was in the process of “bringing what it describes as its armed struggle to a final close . . . Now that that campaign is well and truly over, the army council by deliberate choice is no longer operational or functional . . . This situation has been brought about by a conscious decision to let it fall into disuse.”

This fell a long way short of the conditions Robinson had set out. But after the intervention of Gordon Brown and Brian Cowen, and tense talks involving Robinson and Martin McGuinness at Downing Street, the DUP accepted the report as sufficient for a resumption of powersharing. In light of that experience, the last few days have been not so much back to the future as forward to the past.

It is with peaceful intent, this week’s report tells, that the IRA had held on to some of its guns; to prevent them falling into the hands of elements which haven’t accepted the new dispensation. Why not just dump them in the Lagan? But here’s something else well known to dogs on particular streets – the main purpose of holding on to guns is not to keep them out of the hands of dissidents but to keep dissidence down. While keeping an eye on the arsenal, PIRA members are also apparently “involved in gathering information . . . including details of dissident republicans and the attempted identification of covert human intelligence sources” – informers. But why should the IRA be hunting out informers? Are leading members not on our screens on a nightly basis urging anyone who has information about dissident or other criminality to take it straight to the police station?

“PIRA members believe . . .” Not “know” or even “say”. A reassuring implication lurks that while volunteers might believe the army remains in control of the movement, they may be mistaken.

Which would raise yet another question: If it isn’t true, how come members of the movement have come to believe it?

There is enormous pressure on Sinn Féin and the DUP to cut a deal. But this week’s developments have sharpened rather than resolved the contradictions preventing a durable peace.