‘Dude, where’s my Uber?’ – An Irishwoman’s Diary on the gig economy in San Francisco 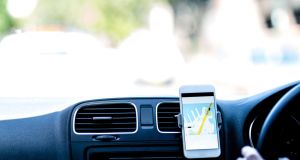 The story outs the young New Orleans ridehailers who lured a hapless rideshare driver to their door, where the girl flashed him as the boy snatched his wallet.

And how clichéd is that? “N’Orlins” is known for a) flashing for any excuse-Mardi Gras beads, say; b) hanky-panky.

At least it’s funny. It’s reached the stage that any Uber headline looks risqué, and if you read their driver blogs you’ll be in boggle overdrive. The twin rideshare giants Uber and Lyft were even banned in Austin, Texas, over lack of driver safety regulations like fingerprinting. Austin then sprouted homemade versions – a side-benefit for local cabbies, promptly reinventing themselves as rideshare drivers. Then Uber’s famously colourful CEO/founder was axed in a bloody coup d’état. It’s an endless soap opera, Uber alles.

But I’ve never felt sorrier for anyone than one new Uber driver the other night.

Not yet 19 and new to San Francisco, Aladdin had near-zero English, his GPS was useless, and was utterly lost. We were hunting for City Tow – my Fiat Bambino had vanished – and sobbing. “So difficult!” he muttered, as I tried to remember the Russian for “go left here”.

Guessing he was from Chechnya, where young gays are tortured and killed, I told Grozny Boy to come learn English in my class, along with Yemeni Said, who lives in Stockton and drives 12 hours a day then sleeps through my class, and Rafael from Recife who hates passengers telling him the way. I’ve modified my syllabus to include: “Officer, I’m afraid we must agree to disagree.”

A rideshare is cheaper than, God knows, car-owning or parking. No tickets or tows, and many a breathalyser fine saved.

Lyft and Uber are gig economy megastars. Like AirBnB they’re local start-ups, born of this city’s need to service ever-expanding citizenry inside traffic toffee. But don’t get locals started! Some 45,000 of them are cruising a tiny peninsula, half appear to be lost, and nothing infuriates them more.

The other night I was standing outside the airport in a line of arrivals hunched over iPhones, or brandishing smartphones overhead like Lady Liberty’s torch.

A torrent of silver Priuses and Toyota Hybrids cruised by, as drivers racked our faces: “Tiffany? Brad? Sergey?”

We peer back: “Latisha? Igor? Marcelo?”

Miraculously, correct combinations click. One stranger invites another into their space.

It’s speed dating minus pain in “the gig economy”! Friendship blossoms – in the same way AirBnB bookings do, when a stranger invites another to sleep in their beds, albeit briefly.

Private arrangements create immediate gain and convenience for both.

I lucked out this time. A Nigerian driver of a white Mercedes Benz braked. I checked my android: “Archibong?” In a blaze of ebony and ivory, Archibong beamed across a vast leather expanse.

Most drivers hate front-seat passengers, but I got the entire saga of Archibong’s car on my 10-minute drive up 101. Archibong bargained its 88-year-old owner down to $20,000 from $25,000. Now he’s making $40 an hour and saving for a Russian trip to the World Cup with his kids.

Whoaaaa! It was exactly the kind of intimate encounter ride-hailers love, since drivers are friendly amateurs doing this for pocket money in their spare time.

Lurching along in lockstep, we dissected World Cup prospects and why Cameroon lost. At least Nigeria made it. And how about that Iceland?

Rudimentary soccerology gets you everywhere in an Uber or Lyft. Thanks to Marcelo, I know Brazil’s prospects.

“Sí, we changed our coach.”

For drivers in this citywide “Big Dig” – a giant construction site with new subway tunnels and roads being resurfaced – driving is nightmarish.

Uber’s intake is slanted towards cars rather than safety fingerprinting – rides must be newish, seat five and not smell of puke (after weekends that’s tough).

But fellow teachers pay less than subway fares to Uber to class. My driver buddy “Juan In A Million” likes sociability as well as his part-time income of around $30 an hour. En route to my favourite Oakland bar, the Wolfhound, we got Ukrainian Vlad, and African American single mom Deneese drove the way back. Thanks to Deneese we got home drunkenly but safely. We can tip and did so.

1 Aaron Brady, the man who said with pride he was a cop killer
2 Coronavirus: 40 new cases and one more death confirmed by Nphet
3 House seized by Cab from Liam Byrne petrol bombed after being rammed by car
4 Aaron Brady found guilty of capital murder of Det Garda Adrian Donohoe
5 Brutalist beauty in Brittas for €495k
Real news has value SUBSCRIBE