On January 1st, DIT, IT Tallaght, and IT Blanchardstown will combine 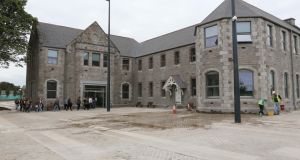 These welcome fainéant days between Christmas and the New Year offer time for reflection and synthesis as well as an opportunity to envisage a fresh approach to activity in the coming calendar year.

Higher education can look back with mixed feelings on the year just ending. The central challenge of funding remains unresolved. Given a minority government, it was never likely that the necessary consensus would be discovered to address the proposals of the expert group chaired by Peter Cassells that reported in 2016.

Notwithstanding the excellent work of that group and the resultant analysis that our system is chronically short of money, it remains the situation that the core case for increased resources has not been firmly landed in the public consciousness by higher education itself. It is interesting to consider that our health service, which has experienced considerable structural change intended to effect improvement, consumes, by international standards, a disproportionately large slice of the resourcing cake without yet realising the outcomes desired.

Conversely, higher education has experienced a decade of cuts to staffing and infrastructure while the student population has grown significantly. By common consent, the system has performed resiliently but for some years now wise voices have pointed to the fact that such a pattern ultimately cannot but impact quality.

It is arguable that the last decade has been lost to Irish higher education. Institutions have had to look inward and concentrate on survival. While the veracity of rankings is contestable, what is not is the fact that Ireland has fallen behind other leading countries in terms of reputation, capacity, and perceived quality as a result of retrenchment.

As an open Anglophone country with a native genius for friendship and a proven creative capacity, Ireland has never been better placed to position itself as a quality education hub. It may be too ambitious to reposition ourselves as saints, but re-establishing a land of scholars is within our grasp.

Few countries share our collective regard for the inherent power of education; not just for the economic or practical benefits but for the deeper contribution it makes to personal development and for the societal cohesion it fosters. We are not immune, nor can we afford to be, from the increasingly utilitarian lens through which education is viewed; but at heart we remain a sentient people imbued with the spirit of Newman.

And there is promise in looking ahead to another year and renewed times. The passage of the Technological Universities Act 2018 presages a new dawn for higher education in Ireland. It found its genesis in the National Strategy for Higher Education to 2030 published in 2011. That foresaw the situation where the development and evolution of institutes of technology into a smaller number of stronger amalgamated institutes should be promoted in order to advance system capacity and performance.

From the first day of 2019 this innovative technological sector will be characterised by a smaller number of institutions, with a greater variety of scale

Performance criteria for these amalgamated institutes should focus on their distinct mission, and, based on demonstrated strong performance against mission-relevant criteria, it is envisaged that some could apply for redesignation as technological universities.

Policymakers in this country have been strong in defending our diversified provision that caters for different talents and learning approaches. We have an excellent traditional university system that in recent decades has been complemented by the growth of an innovative technological sector with 14 institutes of technology positioned around the State.

Their contribution to accessible provision, to economic recovery and the sustainability of regions should not be overlooked and, even when merged to form technological universities, they are mandated to hold to their distinctive mission with strong links to the community, to their regions, and with practical focus.

The functions of the Technological University, as set out in Section 9 of the Technological Universities Act 2018, speak to just such a distinctive provision and one keenly linked to the needs of the region in which the campuses of the technological university are located. From the very first day of 2019 this innovative and dynamic technological sector will be characterised by a smaller number of institutions, but with a greater variety of scale and scope. It will result in enhanced opportunity for learners, increased research capacity and translation to industry, and it better positions Ireland to regain a preeminent international reputation.

Under the current national development plan, Project 2040, the government has identified education as being central to the achievement of its objectives, including a fairer society with greater balance across the regions and coordinated response to the skills requirements of the economy. The plan envisages some €11.9 billion being invested in education and training in the coming decade. If we front load this investment we can better ensure that higher education is equipped to deliver on the ambitious objectives set for it in the plan. Our institutes of technology and emerging technological universities are central to that mission.

There will be a warm welcome to the inaugural president of the first technological university in the State, Prof David FitzPatrick. He and his committed staff who will continue to labour to realise the enhanced culture of the new organisation will do so consistent with the mission of a supportive sector that values its particular contribution to our society. The multi-campus new TU Dublin, with its open and sensitively constructed headquarters central to the regeneration of the northern bank of the Liffey and with some 28,500 students, will be a beacon and leader for the technological sector. With its sister institutions throughout the State, it can be a catalyst for increased economic activity and for the future prosperity of our country.

1 Coronavirus: No new Covid-19 deaths reported in State for first time since March
2 Coronavirus: What will reopen in Ireland’s phases to ease restrictions and what are the dates?
3 Tributes paid to Ireland’s deputy ambassador to China who died on Sunday
4 Unconvincing account may take some heat out of Dominic Cummings controversy
5 André Leon Talley: How Anna Wintour threw her right-hand man ‘under the bus’
Real news has value SUBSCRIBE