Drinks industry has no place in anti-alcohol campaigns

When young people are told to drink responsibly, the emphasis is always on ‘drink’ 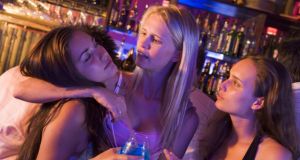 ‘There is a consistent trend for drunkenness among young Irish people, and harmful drinking is highest among 18- to 24-year-olds.’ Photograph: Getty Images

The Union of Students in Ireland knows the impact that Ireland’s relationship with alcohol has on the people living in this country – we’ve lost friends and colleagues in alcohol-related incidents. We’ve seen injuries and mishaps which wouldn’t have happened if we didn’t have a drink-to-get-drunk culture.

We aren’t puritans: a night out with a couple of glasses of wine can be great fun, and Ireland makes some amazing craft beers. Meeting in the pub is a part of our society but we do need a change in the country’s relationship with alcohol.

In Ireland, children and young people grow up in a culture where they are bombarded with pro-alcohol messages from a dominant and profitable industry. Alcohol marketing and advertising reinforce the dangerous message that it is normal to get drunk.

That message is at the root of so much harmful drinking, and we’ve realised that when the industry, through its pet alcohol awareness campaigns, instructs us to “drink responsibly” the emphasis is on “drink”.

The alcohol industry, of course, is adamant that alcohol is not the problem – it produces a high quality, legal product. The fault, the industry’s campaigns imply, lies with the drinkers, who in essence can’t be trusted to drink sensibly. The problem is not with the company making the product which people abuse, but always with the out-of-control people who abuse the product.

The use of the phrase “out of control” is typical of the industry’s approach of attributing the serious problems associated with its products on a “minority” who we are told drink “irresponsibly’, as opposed to the “vast majority” of “responsible” drinkers.

This flies in the face of all the evidence and is at odds with the reality in Ireland. The Health Research Board found last year that more than half of 18- to 75-year-old drinkers were classified as harmful drinkers and that 75 per cent of all alcohol consumed in Ireland in 2013 was through binge drinking.

Young people model their drinking behaviour on the attitudes and actions of those they see around them, as well as being influenced by alcohol marketing. They are a product of their environment and we have allowed an environment to be created that is saturated with alcohol.

Evidence on successful alcohol-harm reduction strategies points to a need for legislation regulating the promotion of alcohol. Young people are continuously exposed – from drinks promotions to sports sponsorship and social media to billboards – to positive images of risk-free drinking.

It is essentially incompatible with the objectives of the alcohol industry to seek to regulate drinking. The objective of alcohol companies is, by definition (and legal obligation in the case of publicly listed companies), to generate maximal profit from their business activities. Harm from alcohol is a public health issue, which is fundamentally at odds with the business objectives of the industry.

That conflict is obvious and damaging to the credibility of the Drink Aware and Role Models campaigns – it’s not carping to point that out – it’s a statement of logic and common sense to say so. It’s very clever for alcohol companies to seek roles for themselves as defenders of public health and it’s crazy for that role to be accepted. We aren’t the only people saying so.

Declaration on Young People and Alcohol

We at USI cut ties with Drink Aware in 2013 because it wasn’t working and we were concerned about a credibility gap. We developed our own independent campaign in 2014: mentaldrinking.ie. The RoleModels.ie campaign is just the latest effort to derail meaningful change and the effective, evidence-based policies that will achieve it – legislated regulation of advertising, sponsorship and promotion, particularly aimed at young people.

Laura Harmon is president of the Union of Students in Ireland

4 The future of Covid-19 in Ireland: Best-case, worst-case and even-worse-case scenarios