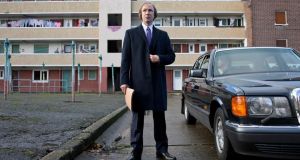 Aidan Gillen as Charles Haughey – Charlie’s creators have described the series as “a drama based on real events”. Much artistic license has been deployed ...

A few weeks before the first instalment of Charlie, the new Haughey television drama, was broadcast, I was involved in a radio discussion on Haughey’s career and his enduring appeal as a subject for analysis.

One of the participants was Geraldine Kennedy, former editor of this newspaper, who was active as a political journalist during the political turmoil of the early 1980s.

Asked to respond to an extract from the first programme that depicted a conversation between herself and Haughey, Kennedy reacted with some puzzlement and bemusement, as she had no memory of any such conversation.

Others who are either characters dramatised in the programmes or the relatives of those featured but no longer alive have responded in different ways. Some are angry at what they see as the caricaturing of their loved ones, as evidenced this week in the strong words of Rachel Doherty about the way her late father Seán, Haughey’s minister for justice in 1982, is portrayed. She described it as “salacious” and queried whether it is “fact-based”.

Charlie’s creators have squared this circle by describing it as “a drama based on real events”.

Much artistic license has been deployed and that has included some farce and fantasy (Des O’Malley brandishing a sword in the lobby of Leinster House was both) but neither have its creators pretended it is something it is not.

Other journalists who were active in covering Haughey’s career have been vocal in their championing of the series as they feel it does justice to the poisonous political atmosphere in the 1980s; in a way, the programmes are seen as a vindication of the claims they have long made that were sometimes regarded as exaggerated.

After Haughey retired, they felt there was a certain revising of this fear question, but it was a fact of Fianna Fáil life under Haughey, and it impacted beyond the party.

Haughey seems to have conceived of his own career as theatre, with him constantly in the lead role, so it is not difficult to see why he has attracted the dramatists.

The problem, perhaps, is that in concentrating on his lust for power at the expense of all else, the programmes depict many of his colleagues as hammy, dim stooges.

Undoubtedly some were, but I would imagine some of them had more dimensions than suggested in the drama.

So did Haughey, and the focus of the programmes allows little space to dissect his contradictions; at various stages in his career he was loyal and disloyal, cultured and crude, a constructive risk-taker and recklessly irresponsible, empathetic and contemptuous.

Bearing this in mind, it is not unlikely that a screenwriter at some stage will craft a sympathetic account of Haughey’s life and career and also claim to have created a drama “based on real events”.

Perhaps much of what has been depicted in these programmes will not loom large in the historian’s view of Haughey from a considerable distance, say in 40 or 50 years time, and will be seen as a sideshow.

One of the things we do not see Haughey do much of in this drama is work; hopefully, access to State or private files in the future will give a greater sense of what was going on, in relation to policy and his thought process, while he was taoiseach, alongside the heaves, vendettas and stunts that were not just about Haughey’s ego and venality but those who facilitated his corruption and those who failed or refused to stop him. Witheringly, Declan Kiberd commented after his death that “the man remained blessed in the mediocrity of his enemies”.

In the programmes to date, it is the quiet rather than the torrid scenes where the dramatists get closest to an important aspect of Haughey and his legacy. He snarls that he is a public “representative” not a public “servant”. But representing who and for what?

Haughey has no answer and just asserts, “I intend to win this election.”

Such an exchange has as much relevance to contemporary attitudes to governance and power as it did 30 years ago.