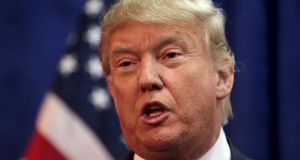 The time has come to retire the words “political correctness”. We’ll get by. We managed for centuries without a term to describe overly censorious policing of language. The Victorians were addicted to euphemisms, but we shook those off without consigning anyone to the dreaded “PC brigade”.

I would not be the first person to invent a red-faced major general when discussing how the term has come to be misused. “Bloody PC nonsense! I knew a black fella in Tanganyika and he didn’t mind a bit if we called him Mr [offensive epithet not allowed here]! You can’t use the word ‘gay’ if you’re feeling happy without the PC brigade suggesting you’re a bloody . . . ” You know how this goes on.

Earlier this month, Donald Trump, comedy caricature made inexplicably popular flesh, single-handedly rendered the major general redundant. In the debate among Republican candidates for the US presidency, Megyn Kelly, a Fox News journalist not known for her warmth to the left, said Trump had called women “fat pigs, dogs, slobs and disgusting animals”.

The real estate magnate responded with the icy logic that has made him such a hero to voters with screwdrivers jammed in their frontal lobes.

“I think the big problem this country has is being politically correct,” he said. “I’ve been challenged by so many people and I don’t frankly have time for total political correctness.”

When, in the early 1990s, the phrase migrated from Marxist orthodoxy to the op-ed pages of the Daily Mail, it was applied to the replacement of hitherto common – arguably offensive – terms with less familiar – arguably priggish – alternatives. These were often slippery distinctions. At this point, no fruitcake, however right-wing, would have described an avoidance of terms such as “fat pigs” and “dogs” as PC (unless the discussion was actually about dogs and pigs).

If we accept there was, in the last decade of the 20th century, an acceleration in efforts to detoxify language, then it is hard to avoid the conclusion that the counterattack has had as much effect as the initial assault.

The term “politically correct” can now be used by anyone to justify almost any degree of rudeness or insensitivity. If (to pick an extreme example that would never happen) I called Trump a squirrel-haired boor with a face made from worn putty and uncooked bacon then, upon registering his objection, I could sneer at him as if he were one of those entirely imaginary left-wing councillors who forced children to sing “Baa baa white sheep”.

A recent article in Atlantic magazine by Greg Lukianoff and Jonathan Haidt addresses the absurd restrictions on academic language demanded by students fearful of encountering even the mildest offence. The delicate souls are, they claim, constantly at risk from “microaggressions”: gestures or phrases that, though often carrying no aggressive intent, constitute a small act of violence. Certain campus guidelines demand students not ask “an Asian-American or Latino-American ‘Where were you born?’ because this implies that he or she is not a real American”. That’s a microaggression, you see.

We have, in this place, already addressed the ludicrous notion of the “trigger warning”. US students really have suggested that, when taught in university, The Great Gatsby should carry a message pointing out the novel contains misogyny and violence. The worry is that anybody previously affected by these outrages will be triggered into a traumatic recurrence.

“Once had Vassar student sneeringly accuse me in the middle of my theatre show in New York of ‘upholding a binary view of gender’,” Panti tweeted last week.

Far too great of a strain is being placed on those two, furiously overused words. Indeed, it now appears as if “political correctness” means pretty much whatever the user wants it to mean. To Donald Trump it describes any attempt to stop him behaving like a low-grade Visigoth. More sensible people drag it out when encountering “trigger warnings” in copies of the Highway Code. (“Contains references to landslides and slippery thoroughfares.”)

We will miss you, political correctness. You’ve been a friend to columnists for a generation. But it’s time to find new ways of whingeing.

1 How much coffee should I drink? How much is too much?
2 Gardaí investigating four-lane motorway sulky race
3 I decided that day if I start working for myself at least I'll know where I stand
4 Two arrested in connection with murder of Keane Mulready-Woods
5 Bloomberg attacked from all sides in heated Democratic debate
Real news has value SUBSCRIBE