Donald Clarke: Controversy over Fury will do the rounds

Boxer’s Sports Personality of the Year listing is proving contentious 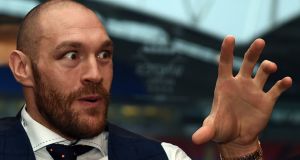 Tyson Fury: Petition to remove the boxer from the Sports Personality of the Year shortlist has close to 100,000 signatures. Photograph: Paul Ellis/Getty Images

We are grateful to Clive Myrie, urbane news anchor, for neatly summarising today’s dilemma. “You cannot be a dickhead and win Sports Personality of the Year,” Myrie said while hosting a BBC newspaper review. We shall see.

Myrie was addressing the unavoidable boorishness of Tyson Fury. The mountainous boxer – raised in Manchester to an Irish family – has, since he won the world title late last month, been engaged in a charm offensive unequalled since the Ostrogoths first visited Rome.

Whereas amateur boxing tends to be a civilised pastime involving committed enthusiasts, the pro game has always attracted a degree of ugly braggadocio. For the most part, however, the unpleasantness stays between the fighters.

In contrast, Fury looks to be brandishing fists to all territories. Much of his nastiness seems driven by fundamentalist religion. “There are only three things that need to be accomplished before the devil comes home,” he has said. “One of them is homosexuality being legal in countries, one of them is abortion and the other one’s paedophilia.”

Elsewhere he drew inspiration from Prof Andy Capp’s Treatise on Gender Politics. In the course of a conversation about women’s boxing, after generally approving of the sport, he commented: “But I believe a woman’s best place is in the kitchen and on her back, that’s my personal belief. Making me a good cup of tea, that’s what I believe.”

There’s more. On Wednesday it emerged that the Sports Journalists Association had barred him from the British Sports Awards. “The decision was made as a consequence of threats made by Fury against at least one sports journalist,” a statement read.

Considerations of Fury’s character came into tight focus when, following his surprising defeat of Wladimir Klitschko in that world title bout, the BBC added Fury’s name to the list of nominees for BBC Sports Personality of the Year.

You could hardly imagine a more mainstream event. All the nice tennis players and all the nice cricketers gather in a warehouse – the SSE Arena in Belfast this year – to josh unthreateningly with the even nicer Gary Lineker. The admirable Jessica Ennis-Hill, heptathlon champion, is among those competing against Fury. Perhaps her example will win him over to the side of liberal generosity. Let’s ask him. “That’s the runner, isn’t it?” he said. “She slaps up good as well. When she’s got a dress on she looks quite fit.” No. I’m still smelling stale Eau de Clarkson.

Anyway, the Cult of the Character will argue that it is Fury’s very obstreperousness that qualifies him for Sports Personality of the Year. In an age of bland automatons, the boxer is never likely to melt into the beige background.

The trouble is that the competition has never had much to do with personality. Previous winners have included such charismatic roisterers as Nigel Mansell, Nick Faldo and Steve Davis. I make no criticism of those men, but few would suggest that any is easily confused with Brian Blessed.

Virginia Wade won in the same year she won Wimbledon. Nearly 40 years later, Andy Murray repeated the double. The TV show is offering a citation to the British sports person deemed to have achieved the most in their chosen diversion.

So, does it matter if the candidate holds views that we deem repugnant? Nobody stops to wonder if a winning shot putter is sufficiently likable to receive his or her prize. It only matters that they threw the shot fairly and further.

At time of writing a petition to eject Fury from Sports Personality was close to achieving 100,000 signatures. Long jumper Greg Rutherford, also nominated, briefly threatened not to attend the ceremony if Fury remained in the race. It may not have much to do with charisma, but winning the annual event does imply some sort of blanket approval.

I will correct Myrie in just one area. You certainly can be a dickhead and win Sports Personality of the Year. But the winner should not be a dickhead.

1 Sacha Baron Cohen: ‘I had to ring the alarm bell and say democracy is in peril’
2 Transmission of Covid-19 on flight into Ireland linked to 59 infections
3 US election: Trump visits battleground states as Covid-19 numbers surge
4 Seán O’Brien: Anger over my parents’ break-up never left me
5 When Anthony Clare met ‘calculating, disturbing’ Jimmy Savile
Real news has value SUBSCRIBE