Donald Clarke: A sentimental journey to ‘The West Wing’

Aaron Sorkin’s series is implausible, corny and irony-free . . . and yet I’m still watching 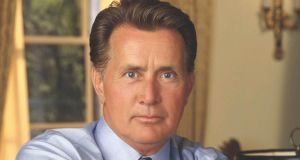 ‘Over the last 15 years, I have gained a black belt in the art of Pretending I’ve Seen The West Wing.’ Martin Sheen as President Bartlett. Photograph: Warner Bros/Getty Images

The West Wing was dreadful. Among cultural entities that sensible people recommend that TV show might just be the most irredeemable. Yes, I really am writing about the Aaron Sorkin series concerning a beatific Irish-American president who is carried from crisis to crisis by his attendant angels.

There is a small window when it’s respectable to consume or discuss a book, film or record. A year or two after publication, respectable readers will not allow themselves to be seen in public with a once voguish novel. As I understand it, “everybody” is ploughing through A Little Life by Hanya Yanagihara now. By my calculation, you have until December 2016 to read it in public without looking like yesterday’s human. After that, Ms Yanagihara’s tale of converging lives in New York city can only be consumed in private.

Something similar happens with television. In the gap between fashionable ubiquity and the dispatch into cultural Narnia, those who haven’t actually seen Who Killed Soren Sorensen’s Elk? must impersonate an iceberg. That tiny tip of intelligence you grasped from a joke on Have I Got News for You? – something about a jumper? – hints at huge (actually non-existent) masses of information beneath the surface.

Over the past 15 years, I have gained a black belt in the art of Pretending I’ve Seen The West Wing. This is easy. We know what presidents do. We have some idea what White House press secretaries do. So, it’s fairly straightforward to make knowing gags about the behaviour of Martin Sheen and Alison Janney in the show. It was hard to avoid articles on the “walk-and-talk” sequences. So the ignorant partygoer can even manage a few observations on televisual technique. Once or twice, I almost got through the first episode. The chatter between the circling officials was clever enough, but the much-celebrated arrival of MartinSheen’s saintly president sent me running from the room with a handkerchief over my mouth.

Having finally forced myself to watch season one a full 16 years after it was first broadcast, I was taken aback to discover that, if anything, it gets worse as it progresses. To enjoy this degree of cheap sentimentality you usually have to seek out films involving dying ponies. The unspeakable nadir comes at the end of episode five.

While Ave Maria surges on the soundtrack – I’m not making this up – Bartlett entertains his adoring staff with a homily so corny it would have frozen the lips of Ronald Reagan. “Surely we can do it again as we did in the time when our eyes looked towards the heavens with outstretched fingers and we touched the face of God,” he says. Argh! I think I’m going to vomit forever and ever and ever.

In a spirit of full disclosure, I should admit I came to The West Wing after sucking down the most recent series of the excellent Veep. That show’s bracing cynicism about the White House rendered the pious sincerity in Sorkin’s series nearly unwatchable. You can also get a less rosy view of the Rose Garden in House of Cards. Both those programmes rely heavily on British predecessors, but they demonstrate that Americans are happy to entertain satirical attacks on the presidency.

In truth, The West Wing was every bit as much a fantasy as Game of Thrones was to become. When it began, Watergate and Vietnam had receded into history, the Soviet regime had recently withered and 9/11 was still a few years in the future. Such dreams were possible.

Despite the soft-focus, patriotic sentimentality – or maybe because of it – the show offered a comfortable place to huddle for 40 minutes every week. I’m still watching. But it is sort of awful.