Independents’ victories are form of direct democracy which should be promoted 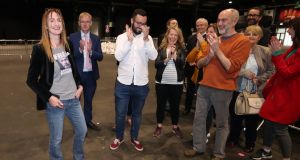 I felt some sympathy for Billy Kelleher last week as the count began in the Ireland South constituency when he suggested in a radio interview that the proposed legislation to establish an electoral commission should be enacted as soon as possible.

He raised a number of issues a commission could consider – such as electronic voting – but the most pressing one for him at that stage was the easy access of first time political hopefuls to the EU election ballot papers.

I must admit that I had not realised it was so feasible until Alice Mary Higgins revealed her own nomination procedure. Her nomination was based on the production of 60 statutory declarations of assessors who are registered voters in a constituency. An alternative approach for a nomination is to pay a deposit of €1,800, or thirdly, to produce a certificate of party affiliation. Undoubtedly, this knowledge facilitated Independent candidates in addition to party nominations leading to a line up of 19 candidates in Dublin; 23 in Ireland-South and 17 in Midlands-North-West.

In the past one of the big problems with left-wing parties in Ireland is their tendency to compete against each other, rather than against a right-wing opposition

In contrast, established party candidates including Kelleher himself had a more difficult nomination process as they had to compete with party colleagues for the official party nomination at selection conventions.

The large number of electoral candidates and the counting and distribution of their votes was a lengthy and demanding task which generated considerable anxiety among the main party candidates at the count centres as it was very difficult to predict the impact of these “newbies’” votes when distributed.

However, despite Kelleher’s reservations it is a useful exercise in democracy in terms of women and minorities entering politics as they do not require support from a traditional party. The meeting organised by the National Women’s Council for Dublin candidates in a central Dublin hotel, revealed several new voices from broadly left-orientated candidates.

In the era of majority parties such as Fine Gael and Fianna Fáil, a new candidate nominated for the first time (often a woman) was put on the party ticket as a running mate with an established politician. They were called “sweepers”. It was never anticipated that they would win – certainly not in their first outing but if they had a good local profile they could divert some number ones from the main opposition party.

On their elimination and with the benefits of proportional representation, many of their votes would be transferred to the senior party candidate (often a man) and help them to reach the quota.

The second party candidate is also a strategy to get a second party seat. Fine Gael in Midlands-North-West effectively used this when Mairead McGuinness exceeded her quota and her surplus votes were then transferred and eventually helped the election of Maria Walsh. Such vote getting is always considered a huge political achievement.

In the past one of the big problems with left-wing parties in Ireland is their tendency to compete against each other, rather than against a right-wing opposition. It seems, however, that running a number of candidates under different headings but broadly left-orientated can be a successful election strategy. Transfers from left-leaning “sweepers” helped the election of Clare Daly in Dublin and Mick Wallace in Ireland South and it is a form of direct democracy which is important to promote.

Daly and Wallace can be classified as “populist”. They are highly critical of current neoliberal-orientated European policy and intend to “raise hell” in the European Parliament. At a European level many of the left-orientated MPs elected to the new parliament are very critical of current economic policy, as it seeks to compete as a capitalist block vis-á-vis other superpowers such as the US, China, Japan etc.

But Independents such as Daly and Wallace must be contrasted with right-wing-orientated populism such as Nigel Farage’s Brexit Party. The latter is a great example of party breakaway populism. It is uncomfortable for the Conservatives, who are accused of not “listening to the people” .

Both trends are, of course, painful for those who keep hoping for a return to an era of majority political parties, even though this system has generated very polarised societies in the UK and the US that few of us want to emulate.

The success of “direct democracy” enables less powerful groups to not only voice their concerns but to make them a force that counts both in the ballot box and in the parliament. The first is now possible, the second a more difficult challenge.