Did the end of the Cold War sow the seeds for a new one?

Mikhail Gorbachev relished the idea that he and the US president were working together to manage world affairs, but it was George HW Bush who took credit for the end of the Cold War, 25 years ago this week 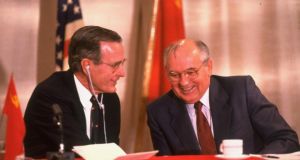 ‘As the Mediterranean Sea was whipped up by winds and rain, the two most powerful men in the world calmly discussed a peaceful future.’ President HW Bush and Soviet President Mikhail Gorbachev at a summit press conference on December 3rd, 1989. (Photo Dirck Halstead/The LIFE Images Collection/Getty Images

Next Wednesday we will commemorate the day 25 years ago when the world was told that the cold war between the West and the USSR was over.

On December 3rd, 1989, Soviet leader Mikhail Gorbachev and US president George HW Bush held a summit meeting on the Soviet cruise liner Maxim Gorky, at anchor off Malta. As the Mediterranean Sea was whipped up by winds and rain, the two most powerful men in the world calmly discussed a peaceful future.

Bush emerged on deck to enthuse about transforming the once hostile East-West relationship “to one of enduring co-operation”. By his side, Mr Gorbachev said the world “is leaving one epoch and entering another”.

They didn’t quite say “the war is over”. But to those of us present from the Moscow press corps, who had been chronicling Gorbachev’s reforms and outreach to the West, it was, in the words of his interpreter, Pavel Palazchenko, “the formal end of the cold war.”

By the time the Soviet Union collapsed in December 1991, Gorbachev and Bush had become friends and collaborators. They used endearments in their frequent telephone conversations, such as, “Dear George, love to Barbara.”

Gorbachev relished the idea that he and the US president were working together to manage world affairs. Indeed, on the day the red flag came down from the Kremlin, Bush called him to say that future historians would give him full credit for his accomplishments.

But it was Mr Bush who took the credit. Five weeks later in Washington, I listened in dismay (I was then White House correspondent) as the US president declared, to cheering a Congress in his State of the Union address, “By the grace of God, America won the cold war.”

It was like a rooster claiming credit for the dawn. Bill Clinton scoffed – imagine that George Bush had defeated communism! But I knew the statement would cut deep in Moscow. Whatever the merit of the argument that capitalism had proved more enduring than communism, many Russians would be grossly offended at this triumphalism.

The end of the cold war launched an era, in Russian eyes, of rebuffs and broken promises. Not long after Malta, Soviet foreign minister Eduard Shevardnadze told me, for the record: “Membership of a united Germany in Nato is unacceptable to us.” Less than two years later, the former East Germany was part of the Nato alliance.

During negotiations over German unity, Gorbachev claims that promises were made by Western leaders to mollify the Kremlin that Nato would not expand eastwards. It did, after the USSR disintegrated, incorporating several former Soviet republics. The end of the cold war left Russia out in the cold.

(History might have taken a less dangerous course if the West had simply asked the newly independent Russia to join Nato. After all, the Soviet Union once applied for membership, back in 1954.)

Subsequent US actions, including missile defence plans for eastern Europe, caused a breakdown in trust, Mikhail Gorbachev said at a symposium in Berlin earlier this month to mark the fall of the Wall.

“Instead of building new mechanisms and institutions of European security,” he said, “and pursuing a major demilitarisation of European politics, the West, and particularly the United States, declared victory in the cold war.”

Euphoria and triumphalism went to the heads of western leaders, Gorbachev charged. Taking advantage of Russia’s weakness, they claimed “monopoly leadership and domination in the world.”

Taking advantage of a defeated foe’s weakness has unfortunate historic outcomes. After the first World War, the Treaty of Versailles stripped Germany of territory and people. National resentment eventually translated into aggression and militarism and the second World War.

The “defeat” of the Soviet Union in the cold war stripped Russia of territory and people. The perceived rebuffs, loss of face and indignities that followed led to the emergence of a combative nationalism, personified by Vladimir Putin.

Now 83 and suffering acute diabetes, Gorbachev is a tragic figure. He sees his legacy undermined daily. At home, authoritarianism has replaced democracy. Abroad, his noble ideas of global co-operation have proved as enduring as the Maxim Gorky, which lies broken in a wreckers yard in India.

Many would argue that a new cold war has already begun. And the danger of it turning into a patchy hot war, as it already has in Ukraine, is greater than at any time since two world leaders declared peace on the rough seas of the Mediterranean.

As Mikhail Gorbachev said in Berlin: “A blister has now turned into a bloody, festering wound.”

Conor O’Clery is former Moscow correspondent of The Irish Times and author of Moscow, December 25, 1991: The Last Day of the Soviet Union