Diarmaid Ferriter: The hunger strike narrative is not as simple as it seems

On this day 35 years ago, INLA hunger striker Michael Devine died in the Maze prison, the tenth and last of the hunger strikers to die 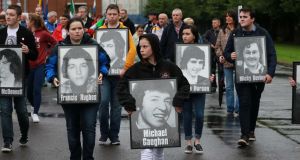 On this day 35 years ago, INLA hunger striker Michael Devine died in the Maze prison, the 10th and last of the hunger strikers to die during one of the most intense and emotive eras of the Troubles and Anglo-Irish history. Although all the dead hunger strikers joined the pantheon of Irish republican martyrs, it is Bobby Sands, the first to die, whose status, fame and legacy endure most powerfully.

The symbolism, sacrifices and polarisation the 1981 hunger strikes embodied, and the political strategies that arose from them have proven very attractive to writers, artists and filmmakers. The lyrical talents of Sands, who left behind a prison diary as well as songs and poems, also honed the legacy and heightened the artistic appeal. The latest to be drawn towards the story of the hunger strikers, principally Sands, is director Brendan Byrne, whose documentary Bobby Sands: 66 Days is showing in cinemas.

It is an intense, moving and brilliantly assembled film, with Sands remembered as hero and as representing continuity in republican history. The words of Terence MacSwiney, the highest-profile republican to die on hunger strike during the War of Independence in 1920, are referenced as providing the compelling logic for Sands: “Not all the forces of all the empires of the Earth can break the spirit of one true man . . . It is not those who can inflict the most, but those who can endure most, who will conquer.”

In the aftermath of MacSwiney’s death in Brixton prison after 74 days on hunger strike, Nevil Macready, the commander of the British forces in Ireland, complained: “This propaganda business is the strongest weapon Sinn Féin has.” That was true of the 1981 hunger strikes also. While cinematic attempts have been made to document some of the tensions and wider human, political and religious contexts of the 1981 hunger strikes, including Terry George’s Some Mother’s Son (1996) and Steve McQueen’s Hunger (2008), there is not enough of that going on in Bobby Sands: 66 Days, for all its qualities.

Fifty years after the 1916 Rising, one of the commemorative offerings was the pageant Seachtar Fear, Seacht Lá (Seven Days, Seven Men), and this new documentary is also narrowly focused, on the one man and his 66 days of hunger strike. This makes it absorbing and tight, but it is also an approach that raises the question of when more nuanced and complicated narratives will emerge. Most of those who spoke about 1916 this year were careful not to use the once-definitive sounding phrase “the men of 1916” or to focus just on political or military contexts as it excluded so many other experiences.

Maria Power in the University of Liverpool has highlighted that, by the end of the 1970s, there were women in the republican movement who, despite their contributions, “felt virtually invisible and who were dissatisfied with the idea that the issue of women’s repression was secondary to that of partition”.

The relationship between feminism and republicanism was fraught, but there is little hint of that in Byrne’s film.

Outside of Sands, questions about who was making what decisions and why remain to be more deeply probed. The claims by ex-IRA prisoner Richard O’Rawe in his 2005 book Blanketmen are still relevant. His book highlighted a British handling of the situation that was inept and callous, but also different feelings among those in the H Blocks (“no compromise” was a euphemism for “no strategy”, O’Rawe suggests), and a fear the republicans would have to harden their position and demands to validate the deaths already occurred, leading to panic and confusion (“I personally displayed an appalling degree of moral ambivalence”).

The officially sanctioned version of 1981 might be compelling but it is suspiciously tight and unanimous. There were many layers to the hunger strikes and they have not all been unfolded.

1 One hundred Irish retailers for all your online Christmas shopping
2 Life under Level 5: Where can I go, who can I see, what is closed and what is open?
3 Thousands of gardaí mount checkpoints and patrol parks, beauty spots
4 Covid-19: Pressure over breakdown in tracing system intensifies as State enters Level 5
5 Developer’s impeccably restored Fitzwilliam Square Georgian for €3.5m
Real news has value SUBSCRIBE